Comprised of a series of three vases, a carafe and a two tumblers, the collection goes by the name of Double Jeu, which literally translates as "double game" suggesting the idea of someone being on both sides.

Each vessel was designed to emulate the curvaceous forms found in chemistry lab apparatus, such as the typically round tubes and conical flasks, as well as the stills used in distillery processes.

The carafe has been blown into a teardrop-like form, and is accompanied by a pair of similarly shaped glasses, all coloured with a choice of smoky grey or champagne detailing.

Each Double Jeu vase, carafe and tumbler is formed of two "fun and functional" detachable elements, with one section made from clear blown glass and another from reflective metallic glass. The two parts can be separated during use. 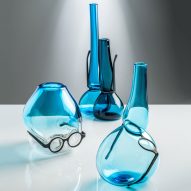 "Sacha Walckhoff continues here his work on duality in design. As in alchemy, everything is constantly metamorphosing," said Verreum.

"What one sees is not necessarily what one believes and one can here interact with the object as elsewhere with matter, shapes and ideas," the company continued.

In addition to designing glassware for Verreum, Walckhoff also acts as the creative director of French fashion brand Christian Lacroix, designing patterns for the company's range of fabric, wallpaper, cushions and rugs.

Italian architect Matteo Thun also created a series of translucent mouth-blown-glass vessels in bulbous and bottle-like shapes, using an adapted version of the cold-processing techniques that have qualities in common with sculpting.