Engineers at Columbia University have 3D-printed a block of "digital wood", using a voxel technique that enables the creation of objects with rich internal textures.

The resin block is modelled on an olive wood sample, with its exact grain pattern replicated throughout.

Because of the grain and colour gradient involved, this kind of wood effect was previously outside of the capabilities of 3D printing, but the Columbia University team used nascent technologies to produce the design.

First, they used destructive tomographic imaging to photograph ultra-fine slices of the wood, cut to just 27 micro-metres (0.027 millimetres) in width by a CNC mill.

The stack of 230 images was then fed to a Stratasys J750 PolyJet printer, which is capable of printing various colours and materials using voxels.

Voxels are like pixels in 3D space – they are the smallest elements into which an object can be divided in the design process.

With voxel printing, designers can specify the qualities they want every point within a 3D space to have – the Columbia University team said that for the Stratasys J750, that's a possible 760 billion individual voxels.

The researchers – Fabian Stute, Joni Mici, Lewis Chamberlain and Hod Lipson – detailed their method in a paper published in the journal 3D Printing and Additive Manufacturing.

"The final printed object closely resembles the original wooden block both in its external appearance and in its internal colour pattern, as confirmed when the block is cut or broken," they said.

The engineers controlled the colour value of each point to produce their digital wood, but they say that the same technique could one day be used with different material properties, such as stiffness, as well. 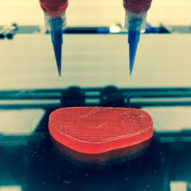 "However, to fully exploit its immense potential, the design tools and paradigms must be updated accordingly."

The researchers write that both the Stratasys printer and Hewlett Packard's Multi Jet Fusion are capable of voxel printing, but that it is currently difficult to prepare the printing files due to a lack of design tools and processes.

"Currently, much of the voxel printing workflow is still left to the designer, who is required to be adept at a variety of disparate software tools and processes, such as destructive imaging, pixel manipulation, and microstructure design," they said.

However, the researchers foresee a future where voxel printing will be widespread, and where makers will be able to download files for it as easily as we can currently access a two-dimensional stock image of wood. To that end, they will be open-sourcing their imaged wood samples from this project.

Another project to explore the role of voxels in 3D printing was the Bartlett-designed Voxel chair, which has an intricate internal pattern rendered in one continuous line of plastic.