The duo, who founded The Golden Triangle in Chicago in 1989, wanted to display their wares in film set-style vignettes to create an intriguing experience.

"Modern retail is theatre and we want our customers to linger and find out about what we have," Van Tress told Dezeen.

Covered walkways continue between each building and around a small garden to provide shelter from monsoon rains.

Cement-coated and exposed traditional brickwork provide the backdrop for the larger antique vignettes, such as a section of a Hindu shrine, and a Game of Thrones-themed room, inspired by the hit TV show. 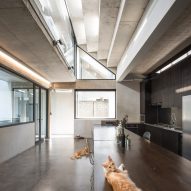 "I wanted a building that was modern but also a but softer, with historical references," said Van Tress.

Khachonphurithanakul also referenced the work of artist James Turrell, arranging the volumes so areas of daylight are cast over different objects and elements to highlight them.

"The purpose of the architecture is to enhance the contents," said Van Tress.

Vast, high spaces have been designed to "elevate" their contents, but also to help mitigate heat along with thick walls.

"Usually galleries control the light, as well as the air. Our gallery is open to the air and the sky," continued Van Tress.

The spaces sit close to the company's  warehouse, originally built to restore antiques before their trip to Chicago. Over the next year they plan to convert it into and a marketplace, restaurant and co-working space.

Recent projects from Chiang Mai include a lotus flower-shaped sports hall made from bamboo, and a concrete house that straddles a shortcut path.

Photography is by Beer Thanet.