A masterplan drawn up by architecture firm Snøhetta envisions an "island" neighbourhood for 12,000 students off the Danube river in south Budapest.

Snøhetta won the Budapest South Gate International Masterplan Design Competition with its design, which involves creating a new channel of water off the Danube branch to form a new peninsular.

Accommodation for 12,000 students is proposed across the 135-hectare site. There will also be education and sporting facilities, set between parks and recreation areas.

An athletics arena in the South Gate will have the capacity to seat 15,000, and the district will be connected to the upcoming Danubias railway station.

Snøhetta, which has offices in Oslo and New York, was selected to design the new neighbourhood ahead of 17 other invited applicants including UNStudio, Feilden Clegg Bradley Studios, Adept and Squire and Partners.

The competition jury praised Snøhetta for making clever use of water and abundant green spaces in its design.

"It boldly accepts the challenge of developing a new neighbourhood in Budapest that does not yet exist. It captures the opportunities of the area – offered by water, green belts and the characteristics of an island," said the judges. 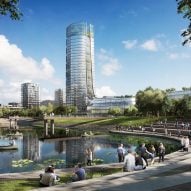 Currently a brownfield site, the peninsula in the south of Hungarian capital is being developed as part of the Budapest 2030 plan – a planning strategy that sets out the city's aims to be more sustainable, energy-efficient and socially minded.

"Budapest has an appropriate potential to become one of the example-giving cities of the world in the next 20 years, in respect of economic and innovation activities, the state of the constructed and natural environments, cultural achievements and possibilities to the population alike," said Budapest mayor István Tarlós.

Also at the southern end of the city, UNStudio has designed a combination tram, rail, cycle and pedestrian bridge over the Danube.

Foster + Partners has designed a 120-metre tower for Budapest, despite a citywide ban on buildings over 90 metres high.

Images by Filippo Bolognese and Snøhetta.