Peter Bilak has designed the set for the Royal Swedish Ballet production of Totality in Parts featuring a multi-armed light structure controlled by computers.

The six-metre wide light installation hangs above the stage and consists of 512 lights arranged along 32 curved arms that together form a circular form.

Each of the 512 lights are controlled via separate digital multiplex system (DMX) channels. The brightness of each bulb can be adjusted to create a variety of light patterns that correspond with the choreography on stage.

The arms themselves also open and close like the petals of a sunflower during the Royal Swedish Ballet performance to create further lighting configurations that measure over eight metres wide.

Although the structure is nearly flat, the designers hope that the movement will allow the piece to look like a multidimensional sphere to the audience, emphasised by controlling the luminosity of each light.

Bilak, who also runs type foundry Typotheque, undertook the set design in collaboration with choreographer Lukáš Timulak who created the movement for the production. The pair have worked together for nearly fifteen years, under their joint project the Make Move Think Foundation. 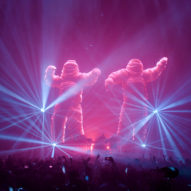 Rather than starting with choreography and making visuals and music to accompany the movement for the production, the choreographer and designer "both start to work at the same time, aligning their ideas along the way to develop all aspects of a new creation," they explained.

The piece opens with a single dancer, who is then joined by another. The number of dancers then doubles to four, then again to eight, and finally a total of 16 dancers take their places on the stage.

"Doubling that number five more times brings us to 512, the number of lights used in the structure above the stage, a central element that is also intended to suggest a sense of varying scale: a DNA molecule, a flower, the planet, the sun, the universe," explained Bilak and Timulak.

They worked on the production with a team that included composer and pianist Volker Bertelman, known as Hauschka, fashion designer Annemarije van Harten and lighting designer Tom Visser.

Bilak stressed that working collaboratively was important to the success of the project, and was informed by the themes of the piece itself.

"We are all distinctly unique and original, yet each of us is inseparable from everything else, and to achieve something beyond our individual abilities, we have to transcend our individual limitations and connect with each other," said Bilak.

"Totality in Parts explores these connections and how big things are made from small things. Even seemingly simple things reveal a complexity of structure upon closer examination."

Totality in Parts premiered at the Royal Opera in Stockholm on 2 November 2018.

Rather than use lighting to create an effect, artist Olafur Eliasson used mirrors and coloured screens to create an abstract set for Tree of Codes, a 2017 ballet choreographed by Wayne McGregor based on a book by Jonathan Safran Foer.