A fracture in The Ocean Cleanup's "giant Pac Man", dispatched to scoop up waste from the Pacific Ocean, has forced the company to abort the mission and haul the apparatus back to shore.

The Dutch non-profit began to tow its System 001 equipment, which is nicknamed Wilson, to a port in Hawaii for repair on 2 January 2019, after finding a portion of the apparatus "drifting away".

Discovered during a routine inspection of the device on 29 December 2018, the fracture was located at one end of the 2,000-foot-long (600-metre), U-shaped floating barrier, which features a 10-foot-long (three-metre) "skirt" underneath to collect the waste in the water.

The Ocean Cleanup admitted it was "surprised" by the damage but believes it is likely to be due to the stress caused by 106 load cycles. Fortunately, stabilisers have ensured that System 001 didn't tip over, while there has been no material lost, or harm to the crew, environment and marine wildlife.

"Saturday, December 29th, unexpectedly one of the tow heads, together with an 18-metre piece of floater pipe with two stabiliser frames, was found to be drifting away from the rest of Wilson," The Ocean Cleanup told Dezeen.

"No prior indications were seen for such a thing to happen, so this came as a surprise for both the offshore crew and the engineering team onshore."

Launched from San Francisco on 8 September 2018, System 001 marked the first large-scale operation to scoop waste plastic from the Pacific Ocean. Propelled by wind and waves, the device scoops up plastic from the ocean "like a giant Pac Man".

The Ocean Cleanup intended Wilson to spend six months collecting plastic in a bid to tackle the Great Pacific Garbage Patch – a concentrated portion of debris located halfway between California and Hawaii.

Wilson to be towed to Hawaii for repair

The mass reportedly contains 1.8 trillion pieces of plastic, and covers an area twice the size of Texas. Its vast surface area sparked a petition to recognise the waste as a country, in order to raise awareness of ocean pollution.

Wilson and the broken end are now being towed by the vessel Maersk Launch. It is are expected to arrive in Honolulu around 15 days from departure, at an estimated travel speed of two to three knots per hour. 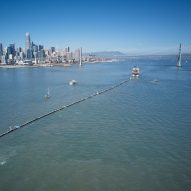 The vessel, which can be tracked online,  is also bringing back 2,000 kilograms of plastic scooped from the patch over the past few weeks.

Once Wilson arrives at the port, the team will use the time to update the machinery and smooth out other problems, including a problem that meant plastic was leaving the system after it was collected.

While "quite bummed" by these major hiccups, the team remains confident in the technology and plans to relaunch in the coming months. The current mission was viewed as a proof-of-concept initiative, used to collect performance data and highlight any design improvements that could be made for future deployments.

"To be clear, we are not ending the programme," The Ocean Cleanup said. "Wilson will be repaired, modified and brought back to the Great Pacific Garbage Patch as soon as possible."

"We realise that setbacks like this are inevitable when pioneering new technology at a rapid pace," the team added. "We expect to be back and operational in the Great Pacific Garbage Patch later this year."

If the relaunch is successful, and funding is made available, The Ocean Cleanup hopes to send 60 more collection systems to the Great Pacific Garbage Patch in the coming years. The aim is to remove half of the waste by five years time.

Dutch engineer Boyan Slat – now the founder and CEO of The Ocean Cleanup – first proposed the cleanup project in 2013, and the device was shortlisted for the 2015 Design of the Year award.

The project is among several aiming to mitigate and raise awareness around the problem of ocean plastic, which is a huge concern for environmentalists.

Adidas' longstanding collaboration with Parley for the Oceans is among the most well-known, with products in the series include trainers made from recycled plastic and of swimwear made from upcycled fishing nets and debris.

An Australian duo has also designed created a floating rubbish bin that filters litter from marinas.