WORKac has unveiled its design for the Beirut Museum of Art in Lebanon, which features a facade of mismatched balconies that will be used to exhibit artwork.

The museum is described as "one of the most significant developments for Lebanese art and culture in a generation", and will sit in the capital city's new Museum Mile.

"Beirut Museum of Art (BeMA) will be centrally located in the heart of Beirut," explained New York-based WORKac.

"It is positioned on a symbolic site in the city that once marked the dividing line in the Lebanese civil war – now to be transformed into a site of unification".

BeMA will take a cube-shaped form, wrapped by seventy "Mediterranean" style balconies, and made from stone and glass fibre reinforced concrete (GFRC) cladding.

WORKac's intention is that art will "spill out" onto the balconies, as well as creating meeting spaces – creating "a new type of flexible exhibition space".

"By blurring the lines between the interior and the exterior, the porous facade dissolves the traditionally closed white cube gallery model," added the architect.

"BeMA will invite the public to engage directly with the work, creating new and varied possibilities for encounters and dialogue with the art as well as amongst its visitors."

BeMA will have six storeys above ground, and four below. It will feature 2,700-square-metres of dedicated exhibition space, and will house a permanent collection of contemporary artwork from Lebanon and Lebanese diaspora. 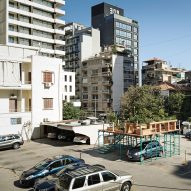 Alongside the exhibition spaces, seventy percent of the BeMA will be dedicated to space for educational programs and public events, a library, offices and a cafe and a rooftop restaurant from which to view the city.

Below ground level, there will be a black box theatre and workshops for collection storage and restoration.

WORKac has incorporated a number of sustainable features into the BeMA's design. Alongside natural ventilation throughout the open lobby, there will be photovoltaic panels on the roof and passive and active solar shading on the facade.

Rainwater collection and usage system will also be directly connected to a green roof over the subterranean car park, while greenery will be integrated into the facade.

Founded in 2003 by Amale Andraos and Dan Wood, WORKac is a 25-person architectural firm based in New York City.

It has worked on a number of museums and galleries, including a reconfiguration of the galleries of the Blaffer Art Museum in Houston, Texas, for which it added a glazed entrance pavilion in front.