Architects and designers can take an activist approach to instigate social change, according to participants in this year's Beirut Design Week.

This year's edition of the annual design week saw locally based designers transform public spaces all over the Lebanese capital, with projects including a garden on stilts, a pop-up library and a movable bench.

Each design was intended to show the potential for these spaces – most of which are rarely used – to improve the city's quality of life.

"In Beirut, the people have no control over public space – they think it does not belong to them, so they don't use it," said activist and architect Mona El Hallak at a roundtable discussion on design and governance that took place during the design week.

"We don't currently have a notion of public ownership and we need to encourage municipalities to think differently."

Designers are riding a surge of increased political engagement

Beirut Design Week 2018 took place from 22 to 29 June, a month after Lebanon held its first national elections in nine years. Citizens had been prompted to engage with political issues for the first time in nearly a decade – and the event organisers sought to capture this new mood with their theme "design and the city".

"What we notice is the growing role of designers, architects and creatives in the interventions and awareness campaigns presented by various parties, institutions and independent groups," said founding director Doreen Toutikan.

"Therefore it seemed very relevant to bring the city into the core of the conversation in our annual festival and ask our community, what makes a good city? And how can design influence that vision?"

Much of the work presented in the design week embraced landscaped and pedestrian-friendly areas – rarities in the Lebanese capital today, because large real-estate developments are replacing older heritage sites. Some interventions were temporary, but others will stay in place permanently.

Ghassan Salameh, the event's newly appointed managing and creative director, said he hoped they would contribute at a grassroots level to social change.

"With Beirut Design Week we want to create projects that focus on more than just commercial design," Salameh told Dezeen. "The idea is to engage as many partners as possible in the city through collaboration."

"I wanted to focus on collaboration because this is something that I feel has become quite problematic in the way that designers work here and even internationally. There is this trend of having design superstars and collectors. Instead, we wanted to work together to see what type of work we could generate."

"Design can make a positive impact on residents' lives"

Since its inception in 2012, the week has been organised by Beirut-based non-profit MENA Design Research Center. As a non-commercial trade show, the event is free from partnerships with brands. It relies, rather, on raising money through funds, grants and sponsorships.

"This allows a certain amount of freedom," said Salameh. "We wanted to step away from the idea that design should be only about products, objects and luxury and being part of a famous design gallery."

"Instead we are talking about how design can become more inclusive and used as a tool to make a positive impact on residents' lives. In a city that has so many problems and a lack of governance, what is the role of design in improving lives in the city?"

In a parking lot adjacent to the busiest highway in Lebanon, Beirut-based designer Nathalie Harb presented a prototype for her Urban Hives: low-cost modular shelters designed to be assembled over parking spaces. The lightweight, car-length platforms provide shade for the cars while also creating a surface for a city allotment. When constructed side-by-side, the platforms can form large communal gardens for local communities.

Beirut is lacking in green space

"The first space I would want to bring back into Beirut is the garden, which has disappeared in the urban fabric over the years due to war and reconstruction. With Urban Hives we're reintroducing green spaces and at the same time not taking any space away from the car park owners."

Harb's Silent Room, a cocoon-like pavilion she showcased at last year's Beirut Design Week, was also on show. This year the shed, which provides a retreat from the city noise, sat in a parking lot off Jeanne D'Arc street, the venue for a number of other design interventions.

Located in Beirut's Hamra and Verdun district, near the American University of Beirut (AUB) campus, the car park hosted design interventions by AUB students for local residents and businesses, with the goal of making Jeanne D'Arc street safer and more accessible.

Attached to a lamp post, Red Riding Hood is a red steel bookshelf and sheltered seat by Beirut collaborative District D. It functions as a free public library, where passersby can drop off and collect books or sit and read. 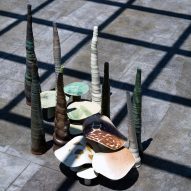 Installed around the AUB campus, bins for disposing of cigarette butts affix to lamp posts in an attempt to combat litter in a city prone to trash crises.

Whereas emptying most cigarette-butt bins requires a five-step process, the Butt Bollard, designed by architect Adrian Muller, empties using a single, intuitive gesture that avoids physical contact with the waste. The recycled butts form a material used to make paddleboards, which are, in turn, used for beach cleanups.

In the public plaza in front of a nearby apartment block, an interactive public bench designed by students Rana Haddad, Pascal Hachem, Tala El Khatib, Jad Najm, Tima Rabbat and Mariya Zantout encourages passersby to pivot back and forth as they chat, with the help of castors mounted at one end.

Organisers removed a lane of parked cars to make way for wider pavements and pedestrians in the area. "It is now one of the few streets in Beirut where you can walk without looking down because you won't fall into a hole or construction debris," said El Hallak.

In the Al Mina region of the neglected northern city of Tripoli – one of the Mediterranean's poorest cities – a new series of public benches respond to an open call by the United Nations Industrial Development Organisation (UNIDO).

Designers and students worked closely with carpenters from Tripoli on the design and production of the benches, now installed along the seafront. One bench, designed by Mostafa Khalifa and his team from BAU, layers panels of laser-cut timber to mimic the form of a seashell. A second, designed by DAMJ, follows an undulating silhouette that takes its cues from a boat hull.

Many of the week's proposals were presented to the mayors of Beirut and Tripoli as pilot projects. Some received a positive response, according to Ghassan Salameh.

"Throughout the design week we've created proposals that can actually function," concluded Salameh. "These solutions are super cheap, can be implemented easily – they don't need planning, government budget or strategies – and they can really improve the liveability of the city."