LG Electronics has revealed a rollable TV, which can be rolled away to be stored out of sight at the click of a button to "liberate users from the limitations of the wall".

The company revealed the 65-inch Signature OLED TV R at the Consumer Electronics Show (CES), the biggest trade show of the year, in Las Vegas this week.

Unfurled the television looks like it has a regular thin 4K OLED screen. However, the display is actually flexible, allowing it to roll up into its base when not in use.

The base doubles as a soundbar, meaning the television has a minimal presence in the room when not in use. It can be placed in front of a window or bookshelf — areas people would usually hesitate to cover with a large screen.

LG Electronics described the product as a "game-changer" that would enable customers to orientate their living space around different functions than watching TV.

"A rollable OLED TV is a true game-changer, liberating users from the limitations of the wall and freeing them to curate their own personal space, which no longer needs to be reserved full time for TV viewing," said LG. 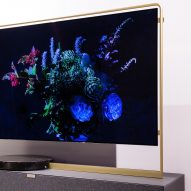 With this development, LG follows a trend set by fellow South Korean company Samsung, which has turned the television into a lifestyle product with innovations such as the disguised Frame TV, the sculptural Serif TV and an Ambient Mode that fills the black screen when it's not in use.

"Since the start of the modern era, television screen sizes have steadily increased in size as resolution improved and consumers demanded a more immersive viewing experience," said LG. "The trade-off came in the form of a large, black rectangle that dominated the room when the TV was not in use."

LG's solution is to give the television three modes of use — Full View, Line View and Zero View. In Zero View, the screen is completely hidden but users can play audio content through the soundbar, which is crafted in brushed aluminium with Kvadrat fabric.

Line View is a part-way option where only the top part of the screen is unrolled to display content such as a clock, photos or a home dashboard.

The TV is powered by LG's Alpha 9 processor, standard across all new models, and the company claims there is no loss of picture quality with the roll-up screen. It is expected to go on sale later this year.

In the meantime, it will remain on display for the duration of CES, which runs from January 8 to 11. The event also saw the reveal of finalists in Toyota's Mobility Unlimited Challenge, which supports start-ups designing for people with lower-limb paralysis.