The Bild X has a display that is ultra-thin and slightly flexible – features that are enabled because its electrical components are hidden away separate to the screen.

Its also made possible by the use of OLED (organic light-emitting diode) technology, which produce significantly thinner screens than were possible with LED or LCD.

OLED is the most popular type of display among high-end televisions launching at IFA 2017.

Sperlein – a London-based designer who has been creative director of German electronics brand Loewe since 2016 – believes OLED offers a chance to "radically alter the aesthetic of TVs", in a similar way as the switch from cathode ray tube displays to flat screens in the 2000s.

Rather than using the thinness of OLED to hide the television set within its surroundings, though, Sperlein and Loewe aim to create devices that serve as a "dramatic focal point" within a room.

It follows on from the Bild 9 design the brand launched earlier this year. Referencing Bauhaus and art-deco styles, Sperlein called it an effort to "de-geezer the television".

Its successor, Bild X, has a display suspended within a thin, gold-coloured metal frame by magnets. Sperlein claims the design is inspired by the way sails are attached on a mast.

The frame and television can be mounted on the wall, or held up on a stand that features a stone platform on the bottom as a textural contrast.

Because of the plastic OLED panel, the display itself is light and flexible, so it can easily be moved into and out of the frame.

Loewe is currently exploring the best way to hide the required cables and electronic components in the design, whether that means containing them in the base of the stand or adding a further component, such as a cabinet, to the design.

It is also investigating the best speaker options to suit the Bild X – although the best approach might be to follow in the footsteps of Sony, which has made speakers redundant on its top-end OLED TVs by making the world's first acoustic, vibrating screens.

The Bild X is on display at the Loewe stand at the IFA (Internationale Funkausstellung), which is on in Berlin from 1 to 6 September.

Also on display at the fair is Samsung's LED Frame television, designed by Yves Behar and released earlier this year. In contrast to Loewe's Bild models, it aims to make the television "disappear into the decor". 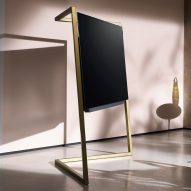 Photography is by Andreas Bohlender.