Humble mortar walls and clay floors are paired with original arched ceilings and decorative doorways inside this family-run guesthouse in Spain, which has been revamped by Lucas y Hernández-Gil.

La Hermandad de Villalba guesthouse, which belongs to a married couple and their two children, has been overhauled by Madrid-based studio Lucas y Hernández-Gil to feature a series of rustic living spaces that honour the original architecture and outdoor landscape.

The eighteenth-century building is located in the main square of Tierra de Barros, a wine-growing town surrounded by rolling, rust-coloured hills in Spain's Extremadura region.

"The project underlines every single one of [the house's] original strengths that were lost over time," explained the studio.

"Simultaneously it adapts to and adds new uses, which can be seen from a contemporary perspective."

To preserve the building's structural shell, the studio has simply freshened up the existing walls with a coating of raw lime mortar and whitewashed the tall vaulted ceilings.

Local potters were tasked with creating replacement clay tiles for the floor, which had fallen into a state beyond repair.

Shiny, deep-red tiles that mimic the colour of the town's natural terrain have been applied to the lower half of walls in the sitting room and directly above the stove in the kitchen to form a splash back.

Several of the home's original wooden doors that are engraved with ornate patterns are also painted pale green in a subtle visual nod to Tierra de Barros' abundance of vineyards.

A couple of new doorways have been created to give guests better access to an external courtyard that features a swimming pool that is clad in the same clay tiles used for the flooring. 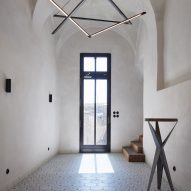 Small square openings that double-up as display niches for ornaments have also been punctuated into a handful of the house's internal walls to let in more light from peripheral windows.

The second floor of the home, which was previously used as a larder and store for cured meats, has been entirely rearranged to accommodate four bedrooms.

Each has been finished in a similar aesthetic to downstairs, with simple furnishings like rattan armchairs and straw rugs.

Much like Lucas y Hernández-Gil, studio ORA maintained a host of features when transforming a 16th-century Czech Republic residence into a guesthouse – historic details include old plasterwork and rough stone steps.