Map Project Office and Universal Design Studio have worked with IBM to create the Q System One, the world's first quantum computer intended for business use.

The computing giant partnered with the British design studios to find an integrated form for the quantum computing system, which carries out calculations in a different way to traditional computers and does not rely on binary digits (bits) with definite states.

The result is the nine-foot-tall, glass IBM Q System One, a replica of which is currently on display at the Consumer Electronics Show (CES) in Las Vegas.

Map and Universal Design Studio told Dezeen that the computer represents a milestone in the nascent field of quantum computing.

"Historically the components of a quantum computer are dispersed throughout a lab, isolated from one another to avoid unnecessary interference," said project directors Will Howe of Map and Jason Holley of Universal Design Studio.

"IBM Q System One is designed to fit into a much smaller footprint, allowing it to sit alongside other systems within a dedicated data centre. By making it scalable and practical, IBM System Q will therefore help democratise quantum computing, which is a major step forward in the commercialisation of the technology."

It's necessary to isolate components in quantum computing because the basic units of information, qubits, are powerful but extremely delicate.

According to IBM, continuously maintaining the quality of qubits is the most challenging aspect of quantum computing today. The ambient noise or vibrations of machinery, temperature fluctuations and electromagnetic waves all cause qubits to lose their special quantum properties.

Those challenges gave rise to the distinctive design of the IBM Q System One. Its half-inch-thick borosilicate glass walls form an airtight enclosure whose inner environment is independent of the room outside.

Inside it, the system is divided into a series of structures, distinct but interwoven, including the prominent cylindrical cryostat that hangs in the middle of the case.

The form and choice of material of this cryostat — stainless steel — is meant to convey coldness and advanced engineering. Inside, the quantum chip is held at a constant -273 degrees centigrade, a temperature colder than outer space.

"These highly refined instruments have been designed to exist in close proximity, but in complete isolation from one another, free from the ambient noise of temperature fluctuations, vibrations and electromagnetic waves," Howe and Holley told Dezeen.

"The language of quantum is therefore conveyed through the unique visual dialogue between the cryostat and vitrine."

Computer currently accessed via the cloud

The IBM Q System One does open up to allow for maintenance and upgrades, using motor-driven rotation around two displaced axes.

The computer is intended for use by businesses and scientific institutions, but that doesn't mean it will be shipped to offices or universities. These computers can only be accessed through the cloud for now, via IBM's Q Experience platform. 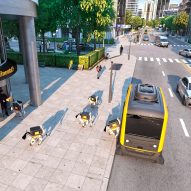 The delicate nature of the equipment is also why only a replica is on show at tech trade fair CES, which runs from 8 to 11 January.

Map is an industrial design studio and Universal Design Studio is an architecture and interiors practice. The London-based sister studios were both founded by designers Edward Barber and Jay Osgerby, who sold the majority stake in them to digital agency AKQA last year.