Design studio PriestmanGoode has collaborated with startup Skyted on a mask that uses jet-engine technology to absorb the wearer's voice so they can make calls in public without being overheard.

The prototype mask, which was unveiled at the 2023 Consumer Electronics Show (CES), is designed to absorb up to 80 per cent of voice sounds. At the same time, an internal microphone records the wearer's voice and transmits it to the caller.

"We're all used to headphones and earbuds as a way of containing sound entering our ears," PriestmanGoode director Luke Hawes told Dezeen. "The Skyted mask does the same for the human voice."

The 220-gram face mask covers the wearer's mouth and nose and can reduce sound by between 25 and 40 decibels thanks to an inner mesh liner. This is made using the same materials that line a jet engine to muffle its sound, according to Hawes.

"Through the support of Airbus Development, The European Space Agency and Onera, we have achieved an optimal product with a voice absorption above 80 per cent but also allowing air to flow around the mask," Hawes said.

"By using this technology, the sound of a voice is absorbed within the mask and any background noise such as traffic noise or other chatter will not be picked up by the inner microphone."

Designed for making audio and video calls, the microphone is fitted inside the mask and uses bone-conduction audio technology to transmit sound.

The mask is designed to be compatible with mobile phones, call or video conferencing software as well as Bluetooth earphones such as Apple's AirPods.

PriestmanGoode, which is best known for its transport designs such as planes and trains, said the mask could potentially be used on flights since the European Commission recently ruled that airlines can now provide 5G technology on board.

"The prospect of multiple passengers making or receiving calls simultaneously would change the overall experience of a flight that we are familiar with today," Hawes explained.

While PriestmanGoode and Skyted are yet to finalise the exact materials for the mask, it will look similar to traditional reusable face masks.

"The anthropomorphic shape of the mask follows the recognisable form of the face and that's really important in human interactions," Hawes said.

"The team has worked hard to ensure it fits the widest possible range of facial types whilst concealing the sound-absorbing technology within." 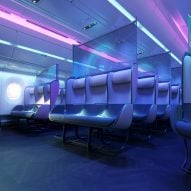 According to PriestmanGoode, demand for noise-absorbing solutions has risen since the coronavirus pandemic, when many people were forced to work outside of the traditional office.

The company also believes that the mask could be worn by gamers, who play interactive games that require voice communication.

"The sound containment features of the mask allow a gamer to fully interact, with no risk of waking the rest of the household at night," Hawes said.

"The same benefits would equally apply in hybrid working environments, where people need to take part in video conferences or calls on the move."

Meanwhile, Dyson unveiled a controversial air-purifying headset in a bid to tackle the "dual challenges" of noise and air pollution.

The images are courtesy of PriestmanGoode.