The designers hope that the resulting material could have a use in architectural design and construction, as spatial dividers, shading features, reinforcement and potentially structural roof or wall systems.

The experiment saw a handcrafted, soft textile column gradually transformed into a rigid structure by using an active textile microbiome (a collection of micro-organisms) of a bacteria called sporosarcina pasteurii to form a calcite layer on the fibre of the knitted structure.

Beyer, who also works as a researcher at London's Royal College of Art, used a customised circular hand-loom to create a 160 centimetre-tall textile column from jute fibre and permeable polyester – both environmentally friendly, sustainable resources.

The column is composed of four distinct knitting patterns that were positioned according to the expected compressive loads throughout the structure.

Beyer experimented with different knitting patterns, varying the density and structure to test how the different structural qualities of individual patterns worked with the bio-calcification process, and how these in turn defined the performance of the final structure.

The finished column was then mounted inside a rotating bioreactor, providing a controlled environment, before being sprayed with an active solution of the sporosarcina pasteurii bacteria.

A second irrigation system was then initiated, applying a solution of calcium chloride and urea to trigger the bacterial calcite solidification.

The micro-organisms actively transform the internal microstructure of the material by depositing microscopic calcite layers in between the fibres, continuously bonding them together.

This alternating treatment was repeated eight times over a period of three days, gradually forming a load-bearing mass of calcite crystals within the fibrous knitted column. 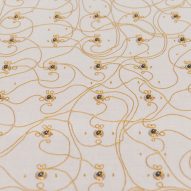 "The material offers an alternative to composite materials derived from petrochemicals, as it is based on natural fibres and solidified by a natural process," explained Beyer.

"While it can't structurally compete with high-tech fibres such as carbon or glass fibres it offers a novel, sustainable and bio-derived composite with an inherent new aesthetic and characteristics for architectural design," he added.

The micro-organisms sprayed onto the knitted structure react to specific external stimuli, which triggers the transformation, meaning that the material is biologically responding to its environment.

According to Beyer, this inherent property could potentially be used for self-assembling or self-repairing material features.

Beyer and Suarez's work is part of a larger research project called ArcInTex, which is funded by the Marie Skłodowska-Curie actions European commission.

Vienna-based artist and designer Ebru Kurbak also combined traditional textile techniques in a modern way, to manufacture electronic objects such as an embroidered computer and a sound recorder made from yarn.

While IKEA's external innovation lab Space10 also showcased a similar project in 2017, when it created a four-metre-high bioreactor dome that enables the high productivity of green micro-algae.

Photography is by Albert Palen.