Zaha Hadid Design has released a series of stainless steel candle holders inspired by the biological process of cell growth.

Zaha Hadid Design looked to the "replication and growth of cellular organisms" when designing the series of candle holders, which are available in a variety of heights and sizes. The holders are made from stainless steel with a highly polished finish.

Each product is made up of clusters of two or three circular bases, meant to evoke the formation of cells as they multiply and grow to create an organism.

"The Cell collection draws inspiration from the replication and growth of cellular organisms. The individual points – the nuclei – are connected by a dramatic reflective landscape, which appears to hover in mid-air," said the studio. 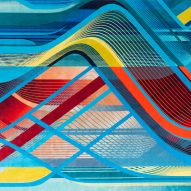 The individual pieces are designed to be stacked on top of one another or reconfigured to suit an individual's needs. Each holder features a domed silhouette that varies in thickness.

"Every angle of this form has been considered and honed so that in profile the edge thickness slightly varies – although this presented a considerable challenge in fabrication, it has produced a subtle, uncompromising and flawless quality," said Zaha Hadid Design.

Zaha Hadid Design was founded in 2006, following the success of Iraqi-British architect Zaha Hadid's eponymous architectural firm, which she established in 1980.

Following the architect's sudden death in 2016, the firm is now headed by Patrik Schumacher who recently launched a bid to become the sole executor of her £70 million estate.

Other products by the company include a reinterpretation of Hans J Wegner's 1963 CH07 lounge chair and a series of carpet designs inspired by Hadid's architectural projects.