An abstract mural is just one of the vivid features that Amber Road and Lymesmith have incorporated in the extensive overhaul of this Sydney home, which has been finished in a variety of "joyful" colours.

The two-storey 1960s property, which is now aptly named Polychrome House, has undergone a five-year renovation process to include more coherent living spaces, all of which have been completed with brightly hued surfaces and furnishings.

Located in the beachy suburb of Cronulla, the house had formally featured characterless brown brick interiors, which matched its external facade. The kitchen and sitting room had also been inconveniently placed up on the second floor, disconnecting its young creative owners from the extensive garden and terrace.

Locally based design studio Amber Road, which was tasked with the overhaul, called on the help of colour consultants Lymesmith to give the home an overall more "energetic" feel.

"As [the client] is an avid art lover, it was imperative that art be an integral part of the brief," Yasmine Ghoniem, co-director of Amber Road, told Dezeen.

"Bright primary colours, which were layered throughout the interior, became the heartbeat of the joyful experience we were all committed to creating."

Ghoniem and her team added a glazed extension that juts out two metres beyond the home's original rear elevation, with doors that can be slid back for easy outdoor access.

Inspired by aerial photographs of the surrounding terrain, its abstract shapes and lines are intended to loosely resemble land formations on a map.

At its centre is a contemporary wood burner.

A rendered wall that runs the length of the kitchen is painted brick red, contrasted by a veiny marble splash back. Inhabitants can also store crockery or cookbooks in a tall, butter-yellow shelving unit that has been incorporated at the rear of the space.

Seating is provided by a curved, white brick plinth that has been fitted with plum-hued seating cushions – at the back it has a small opening where liquor bottles can be displayed. 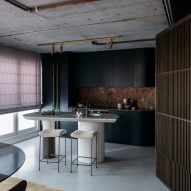 A mismatch selection of poufs in colours like burnt orange and sea green have also been dotted throughout.

"I worked in response to that, building up a sort of colour story and creating colour relationships across the spaces. Harmony, but with surprises and unexpected juxtapositions."

Upstairs has two bedrooms, both with ensuite bathrooms that have been painted pale pink. An extra lounge area at this level features a lime green sofa perched upon a shaggy emerald rug.

The loft has also been converted to accommodate a mezzanine-level guest bedroom. Accessed via a black ladder, it directly overlooks a small study.

Polychrome House stands in bold contrast to the dark-toned Sydney apartment that Amber Road completed at the end of last year, which features black-stained joinery and grey soft furnishings.

Photography is by Prue Ruscoe. Styling by Alicia Sciberras.