Petr Stolin Architekt has wrapped a double-skinned translucent facade of fibreglass around the Nová Ruda kindergarten in the Czech Republic.

The locally based architecture studio designed the educational facility for the town of Liberec with the aim of balancing plentiful outdoor space with the need for security and privacy.

An inner building is covered by a fibreglass-clad wooden frame, and the whole structure is then wrapped by a steel and fibreglass shell. The gap between the two layers forms a terrace space.

"The whole building is embraced by the steel structure with two walking paths around the main sections, hidden from the street by another layer of trapezoidal fibreglass," said Petr Stolin Architekt.

Within the steel shell, the central building surrounds a long courtyard, with staircases and walkways that allow those inside to move between a more private garden space and the more exposed perimeter walkway.

Some of the large openings are aligned in both layers so that views through the facade to the outside are possible, while some look out onto the walkway. At night, this layering is revealed as the openings glow behind the outer skin.

Spaces in the buildings are arranged vertically. At ground level there is a quiet space with rest areas and a dining room.

Above this sits the playroom, which takes advantage of the connection to the courtyard and terraces. 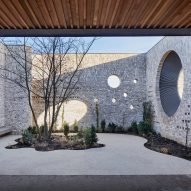 On the top floor, the classroom benefits from skylights and views across an adjacent field.  Terraces and viewing areas on the rooftop are strategically placed alongside cut-outs in the fibreglass shell, looking back down into the central courtyard.

The sloping, north-facing plot directly adjacent to an existing art school, and a need for parking spaces proved a challenge for the project.

This constrained site led Stolín and Mičeková to develop the concept of breaking down the form of the building while keeping it unified by its outer skin.

"We want children to perceive and learn about architecture through various spatial configurations, which are implemented within the whole composition", they explained.

The glowing, lantern-like effect it achieves has also been used by Steven Holl Architects at both the VCU Institute for Contemporary Art and a Maggie's Centre in London.

Photography is by Alex shoots buildings.