Iris van Herpen looked to advances in DNA engineering and female forms in mythology when imagining this sculptural couture collection.

The Dutch fashion designer showcased her Shift Souls collection at the Musee des Beaux-Arts this week as part of the haute couture shows in Paris, alongside a laser light installation by contemporary artist Nick Verstand.

Each of the 18 garments, which featured voluminous spheres, elaborately waved forms and laser-cut detailing, were inspired by human-animal hybrids.

The collection's warm colour palette ranged from shades of indigo and purple to ochre and yellow, and included prints that created optical illusions to "distort the body".

"With the advances in DNA engineering and the first successful creations of human-animal hybrids called cybrids, the mythological dreams of humankind since the dawn of civilisation are shifting to the canvas of science," said the brand.

"While the scientific and ethical implications of cybrids are still unclear, this collection expresses the fact that this reality is upon us."

One piece, made in collaboration with artist and former NASA engineer Kim Keever, featured photographs of "vaporous coloured clouds" printed onto translucent organza and layered to create blurred patterns.

Another look was made of gradient-dyed silk fabrics layered against laser-cut frames of polyethene terephthalate glycol (PETG), a clear-coloured plastic resin, to create voluminous spheroid shapes that are meant to "hover in symbiosis with the body like mythological creatures".

Van Herpen revealed that her initial inspiration came from Harmonia Macrocosmica, an early-1600s star atlas by German-Dutch cartographer Andreas Cellarius, as well as historical representations of mythological and astrological creatures throughout history.

"For Shift Souls, I looked at the evolution of the human shape, its idealisation through time and the hybridisation of the female forms within mythology," said Van Herpen.

"Especially the imagination and the fluidity within identity change in Japanese mythology gave me the inspiration to explore the deeper meaning of identity and how immaterial and mutable it can become within the current coalescence of our digital bodies," she explained. 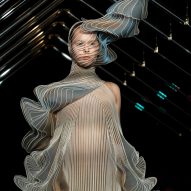 A highlight of the show was a futuristic red dress with a multitude of laser-cut waves, creating a "dance of quivering echoes that optically distort the body".

Accompanying the garments was a series of 3D-printed face jewellery made in collaboration with the Delft University of Technology, developed by 3D-scanning the model's faces and mapping out a shape based on the shifts in density across the face.

For the show's finale, Van Herpen worked with Dutch artist Verstand on a light installation that used walls of laser lights to create a "dreamscape" of circulating clouds on the venue ceiling.

"Iris wanted to envelop the audience within a dreamscape of clouds, relating to the fabrics of the collection designed in collaboration with artist Kim Keever," Verstand told Dezeen.

To create the illusory wall of light, the Dutch artist positioned lasers on the corners of the catwalk, on the floor and above the model's heads.

Air fans were used to direct smoke from smoke machines to the laser surfaces from multiple angles.

"When the smoke mixes with the air and hits the laser beams, it reveals the cloud-like vortices in mid-air while creating the optical illusion of an immaterial wall," said Verstand.

Van Herpen is recognised for applying innovative techniques to unusual materials in her collections. Her previous show saw the designer translate the kinetic movement of birds flying into pleated garments.