Due to open in Autumn of this year, the 33,000 square metre museum is located in Tianjin, and is designed by Bernard Tschumi Architects to showcase the port city's industrial past.

The project was completed in collaboration with the Tianjin Urban Planning and Design Institute, as part of its masterplan for a new cultural centre in the Binhai district.

"We designed the Exploratorium to relate to the rich industrial history of the area, the site of high-volume manufacturing and research," explained the Bernard Tschumi Architects.

The building in the city's Binhai Cultural Center, will contain galleries and spaces for cultural events and exhibitions along with office space restaurants and shops.

All of the Exploratorium's facilities are positioned in and around the giant cone structures, which protrude out from its walls and above the roofline.

They are wrapped by a copper-coloured facade made from perforated aluminium panels, designed by Bernard Tschumi Architects to give the building a "unified presence", while helping it to reduce heat gain. 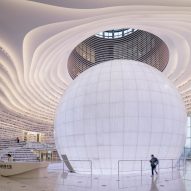 Forming the focal point of the facade is the Exploratorium museum's largest cone, which houses a triple-height lobby with a large spiralling ramp.

It provides access to all public parts of the building, and is lined with the viewing portholes that can be seen scattered across the facade.

Visitors can also follow the ramp up to a viewing platform on the roof of the museum, which nestles amongst the tops of the chimney-like structures, and overlooks the surrounding city.

The smaller chimney-shaped volumes contain spaces for the display of large exhibits.

To create an an "other-worldly feel" inside the museum, Bernard Tschumi Architects fitted circular lights into the ramp to resemble a constellation.

However, dependence on artificial lighting is limited elsewhere, as the conal structures are topped by skylights, and channel natural light into the whole museum.

Bernard Tschumi Architects also designed these structures to function as solar chimneys – a passive cooling and heating system that channels warm air out of the building in summer, and filters it in during the winter.

The Exploratorium sits alongside four other buildings in the Binhai Cultural Center master plan, including the Tianjin Binhai Public Library designed by MVRDV. All five are connected by a public corridor sheltered beneath a glass canopy.

It is the Bernard Tschumi Architects' first large-scale building in China, but it is not the first project by the studio to have a striking facade.

In 2012, Bernard Tschumi Architects completed a visitor's centre with an ornate herringbone exterior on an archaeological site in France, which is designed to references the timber fortifications.