Dutch firm MVRDV has built a public library that looks like a huge eye, as part of a new cultural district in Tianjin, China.

The atrium of the Tianjin Binhai Public Library is deliberately designed to look like a 3D eyeball, staring out through the building's glazed facade.

The five-storey-high space is framed by floor-to-ceiling bookshelves, which are staggered at different levels to form the shape of an eye socket, while a spherical glowing auditorium at the centre forms the pupil.

The curving lines of the shelves provide areas where visitors can sit and read, and observe others doing the same. They also continue out across the glass facade, forming louvres that deflect the glare of the sun.

"We opened the building by creating a beautiful public space inside; a new urban living room is its centre," he said.

"The bookshelves are great spaces to sit and at the same time allow for access to the upper floors. The angles and curves are meant to stimulate different uses of the space, such as reading, walking, meeting and discussing. Together they form the 'eye' of the building: to see and be seen."

MVRDV first revealed its designs for the Tianjin Binhai Public Library in June 2016, when construction was already well underway. It is one of five buildings commissioned by the Tianjin Urban Planning and Design Institute to form a new cultural centre for the Binhai district of the coastal city.

The masterplan for the area was set by German firm GMP – and MVRDV found it a struggle to fit the entire programme into the allotted space. It was this that led the team to create the spherical auditorium at the centre.

"Not being able to touch the building’s volume we 'rolled' the ball shaped auditorium demanded by the brief into the building and the building simply made space for it," said Maas.

The 33,700-square-metre building is the Dutch firm's fastest project completion to date – with a period of just three years between the first sketch and the opening ceremony.

Fast-tracking the process caused a few design headaches. The upper shelves directly above the atrium are currently unreachable, after planned access rooms were dropped – a decision MVRDV said was taken by the local team against their advice.

As a result, these shelves are covered in perforated aluminium plates that printed to look like books. They are cleaned using a system of moveable scaffolding and ropes.

The firm said they hoped that their "full vision for the library may be realised in the future".

The library also houses education facilities, which are located around the periphery of the interior and accessed via the main hall. Subterranean rooms hold a large archive and provide extra book storage.

Reading areas for children and the elderly are located on the ground floor, with reading rooms and lounge areas on the first and second floors. The upper floors contain meeting rooms, offices, computer rooms and two rooftop terraces.

Tianjin Binhai Public Library sits alongside building a new exhibition centre by GMP, as well as other cultural buildings by Bernard Tschumi Architects, Bing Thom Architects and HH Design. All five are connected by a public corridor sheltered beneath a glass canopy.

Based in Rotterdam, MVRDV is led by Maas along with architects Jacob van Rijs and Nathalie de Vries.

Maas was one of three ambassadors at Dutch Design Week last month, along with Dezeen founder Marcus Fairs. During the event, Maas presented a concept for a colourful, futuristic hotel and also launched a book arguing that architects and designers shouldn't be afraid to copy from each other.

Called Copy Paste: The Badass Architectural Copy Guide, the book offers a significant contrast to this project – arguing that the industry should take inspiration from science, where practitioners build upon previous work to make new breakthroughs, rather than constantly striving to remake the wheel. 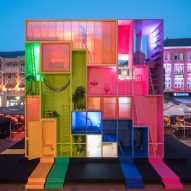 MVRDV presents a hotel you can reconfigure at Dutch Design Week