The Imperial plays host to a series of jewel-tone dining spaces that have been designed by Alexander & Co to boast a similar atmosphere to a "lost palace".

It is situated in the suburb of Erskineville and has been a go-to venue for members of the local LGBT+ community since 1983. However, over the past two decades the building had undergone little maintenance work and fallen into a state of disrepair, leaving it in need of a complete overhaul.

"Something in the metaphor of the restaurant is the ability for this rawness to never feel like a construction site, but instead a theatre of colour, a visual outrage," explained the studio.

"Although the project feels immediately decorative, it is, in fact, a collection of robust building materials faced in makeup – brickwork, concrete, steel, all represented in colour and high fidelity."

The ground floor now contains a 250-seat restaurant called Priscillas. It takes its name from 1994 comedy film The Adventures of Priscilla, Queen of the Desert, which follows the journey of a transgender woman and two drag queens through the Australian outback. 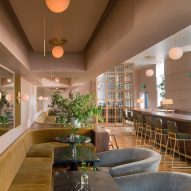 Several of the time-worn walls have been left in their found state or freshened up with a coat of white paint, while a new mural akin to what could be seen in a church has been painted across the ceiling. Dotted throughout are dark wood dining tables, illuminated by fringed lamps and chandeliers that have been suspended overhead.

Should guests want to relax in a more casual setting there are also some lounge-style areas that are dressed with gold velvet sofas and tasselled seating poufs. There is also a pink-hued private dining room, which has a sculpture comprised of strings of coloured paper dangling at its centre.

Another bar at this level, which has a crimson-coloured marble counter and matching leather stool seats, looks through gridded glazing into an indoor courtyard.

Stairs lead to a second-floor eatery, named Up, which is finished with oversized velvet armchairs, a partially mirrored bar counter, and a multicoloured carpet patterned with geometric shapes.

Guests are also have access to a roof terrace that's anchored by a shiny gold pizza oven.

"Conceptually, this space is conceived as an arts social club, a public salon which references Studio 54 and distant memories of Andy Warhol," added the studio.

This year will also see the space used as a same-sex marriage venue.

Brooklyn-based studio Workstead also opted for an opulent aesthetic when it transformed an old brothel in Oklahoma into a wine bar – the space features velvety benches, brass lighting and blush pink walls.