Lofty structures in rural Italy informed the design of this brick house extension that Dominic McKenzie Architects has added to a home in London's Islington.

Originally built in the 1830s, the Grade II-listed property has been renovated and extended by Dominic McKenzie Architects to feature a narrow rectilinear volume at its rear, hence the name Tower House.

"This vertical element was inspired by the towers constructed by competing merchants in the Italian hill town of San Gimignano," explained the practice.

The new structure replaces an extension that was added in the 1980s, but which was poorly insulated and inconveniently contained the home's only bathroom.

Three storeys high, the tall volume accommodates a double-height dining area finished with herringbone-pattern wooden flooring, contrasting the traditional floorboards that appear throughout the rest of the home.

Daylight streams in through a 3.5 metre-high window, which echoes the shape of a sash window that sits just above on part of the original rear elevation, while black timber French doors that give inhabitants access to the garden.

"These large glazed elements produce a playful, unexpected shift in scale upon entry to the lower ground floor and garden," said the studio.

The garden was partially excavated to make room for a sequence of greenery-filled stone terraces that rise up to the level of the former outdoor space. It forms a more scenic backdrop to the dining room, which used to look out onto an unsightly drainage gully. 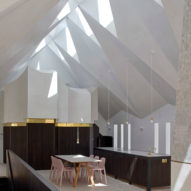 A bathroom now occupies the upper half of the extension, sitting closer to the home's sleeping quarters. It is illuminated by a large skylight and features a bathtub clad in rhombus-shaped tiles.

Only subtle interventions were made elsewhere in the home. Pre-existing joinery was repainted and a Carrara marble fireplace was inserted into the front living room, matching those typically seen in properties from the same period.

This room is painted in Farrow & Ball's Hague Blue, matching the cabinetry in the kitchen and carpeting on the staircase.

The competition's overall winner was architecture studio Craftworks, which created a home within the shell of a derelict chapel.