A home created within the shell of a derelict chapel has won first prize in a contest to find the best new house extensions in London.

Described as "unbeatable", The Chapel by architecture and property development studio Craftworks is this year's winner of the Don't Move, Improve! awards, which are organised by New London Architecture (NLA).

The London-based studio, previously known as John Smart Architects, created the new home within the old structure of a religious building in Camberwell, south London.

A new floor was created beneath, providing space for bedrooms, while a new roof punctured with triangular skylights creates living areas with a dramatic lofty ceiling.

"The Chapel is one of the most dramatic transformations and the jury was unanimous in giving it first prize – the large space and elegant treatment of the roof was unbeatable," said NLA director and jury chair Peter Murray.

Second prize was awarded to Stego, a renovation project by Archmongers at a 1980s end-of-terrace house in Southwark, featuring corrugated metal cladding and green details.

"The second and third prize winners are particularly interesting because the architects took two more unremarkable houses and turned them into something very special," said Murray.

"The joint third prize winner at Lauriston Road is a splendid example of creating light and open spaces using simple and well-chosen materials."

Any home extension or improvement project completed in the last two years, in any one of London's 33 boroughs, was eligible for entry. 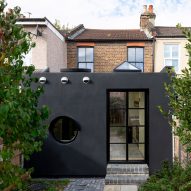 The award for best historic intervention went to Tower House by Dominic McKenzie Architects, a refurbishment of a Grade-II listed house in Islington.

Kings Grove in Southwark by Al-Jawad Pike won the award for best use of materials, with its combination of pigmented concrete blockwork and well-crafted joinery.

Two projects were recognised for cost effectiveness: Scissor Truss House in Lambeth by Studio MESH and Breakout Extension in Haringey by Knott Architects.

An award for sustainability went to Reuse Flat in Hackney by Arboreal Architecture.

Winners were revealed in a reception at The Building Centre last night. An exhibition of longlisted designs was unveiled at the same time.

Previous winners of the prize include Sun Rain Rooms, a revamped Georgian townhouse with a patio that transforms into a reflecting pool, and Sunken Bath Project, a garden room containing a sunken Japanese-style bath