MVRDV has released visuals of KoolKiel, a mixed-use complex in Kiel, Germany, which will have its final form determined in consultation with the community.

The commission winning proposal by MVRDV for the post-industrial site at tip of the Kiel Fjord will be adapted as the design is finalised. There are range of eventual options with additional balconies, varied sculptural concrete panels and differing room arrangements.

"In a location with such a dynamic and creative existing community, it's obvious that the community should have a say in this development," said Jacob van Rijs, principal and cofounder of MVRDV.

"KoolKiel is not only inspired by them, but it also allows them to influence the proposal—we're presenting them with not just a design, but also a question: 'how 'Kool' do you want it?'"

The complex will measure 65,000 square metres, and comprise a mix of residential and commercial buildings. It will also include the renovation a large building that built to store chains for ships and is the place Werner comics were printed in the early 1980s,

Each building within the KoolKiel complex will be adaptable, and be wrapped by customisable concrete panels, which are cast in a variety different shapes to reference the "creative output of the locals".

The existing building will be transformed into flexible commercial units on the lower levels. It will be extended vertically with a series of apartments, the form of which will be determined during the design process.

MVRDV has developed a set of different shape modules to create these apartments, which can be combined in different ways to make the total number of apartments, their sizes and layouts all customisable.

A 250-room hotel will sit at the end of the site. The number  and size of the cantilevers containing balconies that will extend from this tower will also be determined in consultation with the community.

The hotel will be connected to an office tower at the second storey by a roof that will form a sheltered public event space below.

This roof will extend into a building containing shops, which will be topped by three cube-shaped housing blocks. 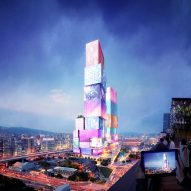 MVRDV has also have incorporated a series of "lively exterior spaces" throughout the KoolKiel scheme.

The grass roof above the shopping units will double as an outdoor area for the housing blocks and office tower, and there will be a ground level courtyard between the buildings complete with street furniture.

A series of smaller rooftop throughout the complex will be used to encourage biodiversity, while solar panels and rainwater collections will be incorporated to improve the environmental performance of the building.

KoolKiel follows MVRDV's recent reveal of visuals for the Taipei Towers, which it has dubbed "a Times Square for Taiwan".

The towers, which will be 337 and 280-metres-tall, will be made from stacks of misaligned blocks wrapped in interactive screens.