The D*Haus Company developed its proposal to fulfil the brief, which called for Dezeen readers to design a home that responds to the challenges a city might face a century from now. Its design responds to a future when  city's are impacted by significant urban flooding caused by rising sea levels.

Despite the competition's futuristic premise, the studio chose to turn to the past for inspiration and proposed what The D*Haus Company describes as a "more vernacular future".

The proportions of the structures are based on traditional two-storey houses in London and are adorned with decorative motifs that reference the "exquisite Georgian facades" of homes built between the eighteenth and early nineteenth centuries.

"We started to look at what London was like 100 years in the past to gauge the level of change," said David Ben-Grunberg and Daniel Woolfson, the architects behind the submission.

"100 years ago, Londoners were enjoying all the Georgian, Edwardian and Victorian housing typologies [that are still popular today]. That gives us a strong indication that in 100 years' time, a lot of London's population will still be retro fitting and adapting this historic building type," the architects told Dezeen.

The houses would be constructed from plywood using computer numerically controlled (CNC) technology, which the architects say would be a much quicker and more sustainable construction method than the original brick.

"We want to recreate the Georgian look but in a completely different way," Ben-Grunberg and Woolfson said.

The architects envision that the facades would be stained in pastel colours resembling "the [houses] that can be found in small pockets in Kentish Town, Primrose Hill and Notting Hill, which are some of the most desirable places to live in London today." 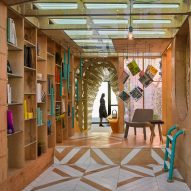 Other period details include statues and depictions of British kings George I, George II, George III and George IV, after whom the historical period is named.

The architects' vision for the interiors of the homes is much more modern.

Each house would feature a large timber CNC-cut staircase that "curves in and out" of the floors, which in turn are staggered to create open, double-height spaces.

Rather than a roof, the third floor would be transformed into a semi-enclosed outdoor space.

"The third floor is really a roof garden or terrace, where the user can enjoy some outside space during the floods," the architects said.

The D*Haus Company's Kentish Classic concept beat over 400 competition entries from 56 different countries around the world and was selected as the winner from a shortlist of 15.