MINI Living Urban Cabins were installed in London, New York, Los Angeles and Beijing over the space of a year. In the latest video from our Dezeen x MINI Living series, we look back at all four.

Each of the MINI Living cabins is a modular 15-square-metre micro home, featuring a bedroom, bathroom, living room and kitchen.

The project aims to showcase ideas for how to maximise living space on a tiny footprint, as well as exploring how architecture can be used to make the most of unused spaces in cities.

"It was an approach based on three main ideas: the creative use of space, iconic design and, of course, a fun experience. With MINI Living we are translating those ideas to reinvent housing and rethink the way we live inside cities," he told Dezeen.

Jacob added a library to the cabin

MINI Living teamed up with London architect Sam Jacob for its first Urban Cabin, which was installed during London Design Festival 2017.

Jacob added a library to the cabin, which was a response to the closure of many public libraries across the UK capital. The additional room was made from slabs of different materials layered on top of each other like a pile of books.

The second Urban Cabin was installed within a small Brooklyn courtyard at creative space A/D/O in New York in October 2017. One end of the cabin could be opened up on a giant hinge.

This was a reference to the immigrant experience of New York, which can initially seem frightening to new arrivals, but also provides a safe home to millions of people.

MINI Living worked with FreelandBuck to create a micro home on an empty Los Angeles rooftop for the third iteration of the Urban Cabin in June 2018.

The tiny home featured an open steel structure – a reference to the never-ending construction in the city – and combined interior and exterior spaces to make the most of the Californian weather.

The most recent MINI Living Urban Cabin was installed in Beijing as part of the China House Vision exhibition in September 2018.

Penda co-founder Dayong Sun added reflective periscope roofs and a swing to the cabin. These were references to his childhood memories of growing up in hutongs, the traditional courtyard neighbourhoods that are disappearing across Beijing.

For MINI Living, the Urban Cabin series is a testbed for ideas that will feature in a permanent co-living building due to open in Shanghai next year.

The merging of public and private space was a common theme running through all four cabins. Each featured revolving panels and hatches, which would be opened or closed depending on the occupant's desire for privacy. 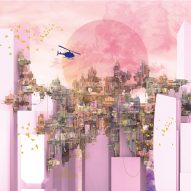 "It is always a big topic for us to have these public and private areas," MINI Living designer Corinna Natter said. "We have all these modular elements in the cabins that can rotate and fold out of the facade."

In addition, a key concept behind the cabins is to cater to the increasing numbers of urban nomads – people who work remotely and travel from place to place instead of putting down roots in one city.

The idea is to create what MINI Living describes as a "global village" of cabins, which people could theoretically stay at as they move between cities.

"People are travelling more and more nowadays so they have kind of a home in every city," Natter said. "That is why we want to create a global village of urban cabins, where people can experience what is really specific about cities and the places they are living in."

MINI Living worked with a local architect in each city to adapt the base modular Urban Cabin structure to make it unique to its location.

The project forms part of the wider MINI Living initiative, launched by the car company in 2016 to develop architectural solutions for future urban living spaces.