Yalin Mimarlik has completed a weathering-steel-clad archaeological museum in northwest Turkey, which is dedicated to the history of the city of Troy.

Located 800 metres from the site of the ancient city, the orange-coloured museum was designed by Turkish architecture studio Yalin Mimarlik to resemble an "excavated artefact".

It takes the form of a cube clad in weathering steel called Corten, which extends down below the ground into a vast subterranean level.

First excavated in 1870, Troy is an ancient city famous for the mythical siege narrated in Homer's Iliad. Excavations from the site reveal the earliest contact made between the civilisations of Asia and the Mediterranean.

"Museum of Troy is honouring this heritage and is a medium to tell the rich history of Troy in relation to its natural, cultural, artistic and archeological context," explained the architects.

Yalin Mimarlik won a competition held by Turkey's Ministry of Culture and Tourism to design a museum at the UNESCO World Heritage site in 2011.

The Museum of Troy's entrance is on the subterranean floor, accessed by a large ramp lined with concrete walls indented with niches to hold small exhibits. 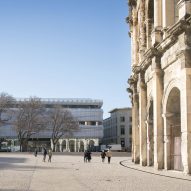 As well as the entrance hall, this underground floor houses exhibition spaces, a cafe, restaurant, retail facilities, and hidden conservation laboratories and storage space for the museum's collection.

From the subterranean space a series of internal ramps that wrap around the inside of the cube provide access to the exhibition spaces above.

These ramps also lead up to a rooftop terrace, which provides views out onto the site of Troy and areas of archeological excavation nearby.

All the Museum of Troy's interiors have been minimally furnished, with the building's concrete frame left exposed to retain focus on the exhibits.

Corten steel is the only trademarked material to make it into the Dezeen Hot List. In 2017, architecture studio Elding Oscarson also used the material in its extension of the Skissernas Museum in Lund, Sweden, which is designed to complement a historic red brick building nearby.

Photography is by Emre Dörter unless stated.