What could possibly be bad about recreating an example of great design, asks Michael Miner, who was criticised by Aaron Betsky for wanting to resurrect a Frank Lloyd Wright building.

Has it already been almost two years since Aaron Betsky wrote a Dezeen piece criticising both my efforts at rebuilding the demolished Frank Lloyd Wright-designed pavilion in Canada's Banff National Park, as well as those by a New York architect to rebuild Penn Station and restore several city blocks in Manhattan to their original grandeur?

I've been busy doing other things, but I think now is finally the right time to respond. I would like to share some of my favourite quotes from Betsky's article, and then tell you what I think.

"...we can bring dead [buildings] to life [through digital mapping technology] with such expertise and skill that it will be impossible to tell that they are reproductions."

Is it seriously being suggested here that experiencing a Frank Lloyd Wright building through seeing it as a computer-generated 3D model is a satisfactory replacement of seeing the actual building in person? The mere suggestion of that being the case is one of the most frightening ideas I can imagine.

The argument boils down to "Why bother to exist in the real world at all, with all of its authentic wonders, when you can sit home on your couch, put on a pair of futuristic goggles, and experience it virtually". Personally, I don't want to virtually do anything. I want to do it for real.

And then, of course, why have architects at all? Or painters, or sculptors, or creators of anything tangible, which can be actually be felt or touched? Wright's greatest love was nature. Why bother to experience the natural wonders of Yellowstone, Yosemite, Zion, or the Grand Canyon in person?

I don't want to virtually do anything. I want to do it for real

This idea is not only preposterous, it is fundamentally dangerous. If there is a single word one associates with Frank Lloyd Wright, it is organic. To me, organic means real. I hear people all the time state that they believe Wright would have embraced today's technology as a means to somehow make architectural design better. I emphatically disagree.

Sure, technology can be a useful tool, but technology should never be the destination, only the means by which to get there. Guys, there's a real world out there. Embrace it.

"...Michael Miner has taken it upon himself to resurrect a Frank Lloyd Wright pavilion in Banff..."

I'd like to point out that the Banff Pavilion would not be the first Frank Lloyd Wright project ever resurrected, even by me. I was responsible for having the Frank Lloyd Wright-designed doghouse rebuilt by original client Jim Berger, along with his brother Eric, back in 2010 for my film "Romanza".

Also, when film producer Joel Silver obtained and completely restored the Auldbrass Plantation in South Carolina, he not only refurbished the existing dilapidated structures, he rebuilt from scratch several of the service buildings which had been lost in a 1952 fire.

Technology should never be the destination, only the means by which to get there

Since those buildings had never been properly executed by original client C Leigh Stevens due to material shortages during the second world war (construction began in 1940), Silver was able to properly construct the buildings to Wright's precise specifications and using the correct materials, so that now those buildings are superior to the originals.

And I can think of no one, except the most fringe-thinking purists, who consider these rebuilt structures as inauthentic.

"...the dead arise again as monsters, not as familiar friends, and as undead that suck the life out of the world around us."

Huh?! Monsters?! Really?! I'm really not aware of the doghouse ever having grown to a gargantuan size and begun terrorising Tokyo, carelessly stomping on people, swinging its tail to destroy infrastructure, and melting electrical towers with its radioactive fire breath.

Nor am I familiar with the rebuilt Auldbrass buildings tearing loose from their foundations, and aimlessly wandering the countryside looking for human brains to eat. I always thought that the Boogeyman was only used to get children to do their homework and eat their vegetables. Using fear tactics to scare people away from supporting our efforts is out of the most lowly politician's playbook. 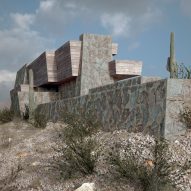 "Should we resurrect dead buildings?"

There is nothing to fear from a good building. Bad buildings yes, there is much to fear from them. The fear that the standards for creative work, or any other type of work for that matter, will sink so low that poor work will then be deemed as acceptable, mediocre work will be considered excellent, and therefore, excellent work will cease to exist.

And so, why bother? Mediocrity sells.

"How to make something new out of the old, rather than tearing down the new to build the old, is our true task."

What is most objectionable to me, more so than the silly arguments made above, is that the overall premise of Betsky's article seems to suggest that there is a finite amount of money available in the philanthropic world, which is unable to simultaneously support both the rebuilding and restoration of historic architecture, that a potential donor has to choose between supporting one or the other.

Nonsense. Rebuilding architectural masterpieces will only serve to bring awareness of the need to accomplish both tasks, and bring in donations from those who might not otherwise have been aware of these causes.

As demonstrated by the doghouse story, we have already successfully captured the public's imagination, and as a result, these stories are being covered by many high-profile mainstream publications, and not just the architectural trades. The New York Times, Wall Street Journal, and NPR have all done stories, just to name a few.

You out there, take people to Fallingwater

To summarise, I hate to criticise the American public, but there currently exists a tremendous cultural and aesthetic illiteracy in this country. Until people can distinguish good design from bad, they will unlikely be able to distinguish good ideas from bad, and America will continue in the downward spiral in which it now finds itself.

You out there, take people to Fallingwater, take them to the Dana-Thomas house, and the Johnson Wax buildings. It may change their lives. Really.

I believe that it is incumbent upon those of us who possess at least a trace of aesthetic judgment to enlighten those who do not. That, I contend, is our true task.

Since 2002, filmmaker Michael Miner has devoted his entire career to documenting Frank Lloyd Wright buildings in such films as Sacred Spaces, A Child of the Sun, Romanza and the newly released Masterpieces. In 2016 he formed the non-profit Frank Lloyd Wright Revival Initiative, dedicated to the rebuilding of demolished Frank Lloyd Wright structures on their original sites. Its inaugural project is the Banff Pavilion in Alberta, Canada built in 1914, demolished in 1939. Several other Frank Lloyd Wright projects are currently in the works.
Read more: