A crystal chandelier tangled with 100 colourful stuffed birds and an unfurling wooden cabinet are among a series of new works that artist and designer Sebastian Errazuriz is showing in New York.

New York-based, Chilean-born Errazuriz is debuting the new Bird, Mechanical Cabinet and Metamorphosis series in the Breaking the Box exhibit at the R & Company gallery, located in Manhattan's Tribeca neighbourhood.

Comprising "vibrant taxidermy", moving cabinetry and organic furniture, the works are intended to "reconsider conventions", following the designer's past experimental projects that include penis paperweights and statues that double as seats.

"We tend to understand reality by constraining meaning into closed and simplified boxes defined by previous cultural conventions," said Errazuriz in a statement.

"We live within these pre-established cognitive borders where we only tend to see, recognise and accept as true that which has been previously ordered and defined."

A highlight of the showcase is the Bird Chandelier, which Errazuriz designed to hang down a 40-foot-high (12.1-metre) atrium at R & Company, providing a centrepiece for the exhibition. 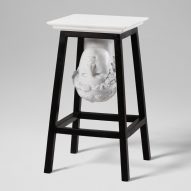 It is among his Bird set, which also includes a hanging lamp that acts as a perch for colourful small creatures in different poses – some with their wings raised. There is also a mirror that has a stuffed bird on a twig, as if looking back its reflection.

Lastly, two headless birds rest on a pair of lamps, with light bulbs in place of their heads.

The top floor of the gallery – a 19th-century building recently overhauled by Thai architect Kulapat Yantrasast – is dedicated to Errazuriz's Mechanical Cabinet series.

Designed to appear "simplistically elegant", the wooden credenzas, cabinets and boxes are crafted to open in various ways, including rotating and spinning, and transform into new shapes.

The dark wooden Grand Complication gradually opens to reveal different compartments, drawers resting on stilts, and a mirror. The Kaleidoscope, meanwhile, is fronted with four doors that reveal a series of optical, reflective surfaces hidden inside.

"Merging both advanced technology and traditional craft, this versatile series allow for various interpretations that test the limits between sculpture and function," said R & Company.

"The mechanical cabinet series is part of an ongoing exercise developing through systems to create outside of the box in methodical and structured manners," said Errazuriz. "On the other end, this aviary series embody the daily reminder of the fragility of time and his need to also think freely and intuitively."

Other designs on show as part of Breaking the Box include the Metamorphosis bench and table, which are carved from a tree using a mixture of computer numerically controlled (CNC) robots and high-end hand carving.

Also in New York, the Gagosian is staging a Marc Newson exhibition featuring swords and surfboards, while the Carpenters Workshop Gallery is showing heavy travertine tables by David/Nicolas.

Photography is by Sebastian Errazuriz, unless stated otherwise. Featured image is by Joe Kramm.