Canadian firm ACDF Architecture has designed a lake house on a sloping site in Quebec, with a protruding terrace so residents can get even closer to the water's edge.

La Barque Residence was built as a holiday home for a family on a plot overlooking Lake Ouareau in Saint-Donat – two hours north of Montreal.

The two-storey concrete house by ACDF Architecture is clad in blackened wood at its top and left exposed at its base. Topped with a flat roof, the home's appearance sits in stark contrast to its natural setting.

However, the architects integrated the building into its sloping site, so both levels can be accessed from the grassy earth. From the front, the design appears private and closed off, while full-height windows at the rear present views of the lake and surrounding mountains.

"The site's characteristics strongly influenced the architectural concept," said ACDF. "Nestled between a road and the lake, the house shelters itself from unwanted attention on the street side with its dislocated facade that extends into an exterior wall hiding a barbecue and a pizza oven."

Around the back is a patio with glass railings, which is sheltered by the overhanging roof that extends the length of the house. 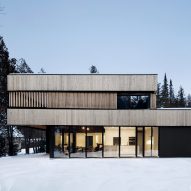 Interiors include polished concrete floors and walls in either black and white. Contemporary furnishings are monochrome as well, and used to sparsely accent the spacious floor plan.

"La Barque might present itself as a dark wood prism sitting on a mineral base, but it hides a surprising softness," said the studio.

A focal point of the interiors is a curved ceiling clad in pale wooden boards, adding a warmer touch to the cool tones elsewhere. Sunlight also penetrates inside via raised portions of the ceiling at either end of the residence.

"Under the curved ceiling of the house, reminiscent of a boat hull, its serene interior atmosphere captures the calm of the surrounding hills and provides the family with a place to catch its breath between two ski slopes or two waterski runs," said ACDF.

In addition to La Barque, the studio has created two other lake houses in Quebec: a three-bedroom home clad in pale wood and shared by two sisters, and white, gabled extension to a log cabin that is linked by a glazed bridge.

Based in Montreal, ACDF's range of projects also spans a copper-hued complex in Vancouver, a colour-blocked office for a software company, and Hotel Monville in Montreal. 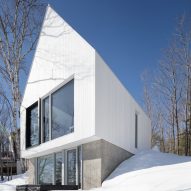