Electric and equipped with real-time riding data, the new Coleen e-bike is designed to "reinvent the pleasure of urban travel", and is developed specifically for city-dwellers.

The bicycle boasts a T-shaped carbon-fibre frame that differs from the usual triangular bike form, and is constructed from 75 specially designed components to create a structure that offers no visible reinforcement.

The design is modelled after the bent steel and aluminium bicycle that French architect and designer Jean Prouvé created during world war two.

"The frame geometry takes its inspiration from that of the first 'dandy-horses' invented near the Avenue de Montaigne in Paris in 1861," explained founders Audrey Lefort and Thibault Halm.

"It was the same geometry that in 1941 would inspire Jean Prouvé to create a bike designed for the workers of France," they continued.

Combining "timeless" design with modern technologies, the Coleen bike was exhibited at this year's Consumer Electronics Show (CES), which took place from 8 to 11 January in Las Vegas. 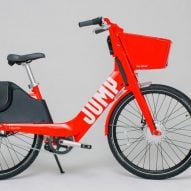 The user can control the information visible on this display to avoid too many distractions, and any extra data collected is sent by bluetooth and stored in the user's smartphone via the Coleen app.

The transflective screen reflects light to provide optimum visuals, enabling it to be seen well in both full sunlight and at night.

The bike is also fitted with a keyless ignition system that works via bluetooth to allow riders to unlock and start their bike remotely using their smartphone.

"Our commitment from the start was to leverage technology in ways that allowed us to integrate and embed future developments in the technology platform devoted to the pleasures of mobility, which we call Coleen," said Lefort.

This motor is powered by a 529 watt-hour removable battery that, according to the creators, takes only two and a half hours to fully charge and can run for more than 62 miles on a single charge.

Lefort and Halm also claim that the bike has 42 cells, giving it the highest battery capacity in the market at 3.6 amp-hour per cell. There are also no wired connections between the cells to ensure optimal durability.

Designed and manufactured in France, the Coleen bike is "100 per cent French down to the smallest detail", featuring a leather saddle made by French luxury accessories brand Voltaire, and will be available to buy from summer 2019.