University of Pennsylvania engineers have altered a sheet of nickel to produce a material they call "metallic wood", which is extremely strong and light.

Researchers from the University of Pennsylvania took inspiration from the natural world to build pores into the nickel on a nanoscale level, making it less dense.

About 70 per cent of the final material is empty space, giving it a density similar to water — light enough that a brick of it would float.

"Metallic wood" as strong as titanium

Still working on the nanoscale, just above the size of atoms, they reinforced load-bearing struts within the nickel to increase the material's overall strength to that of titanium, although it is four to five times lighter.

"We refer to this material as a 'metallic wood', because it has the high mechanical strength and chemical stability of metal, as well as a density close to that of natural materials such as wood," wrote the researchers in a paper published in the journal Scientific Reports. 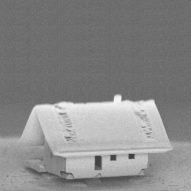 Titanium is the current metal of choice for products ranging from aircraft to tennis racquets because of its high strength-to-weight ratio.

Metallic wood would theoretically be more high performing, but it is not yet ready for commercial production and would require more testing.

Material "beautiful" as well as strong and light

The researchers' samples of the material are in sheets of just a few centimetres squared — enough to be used for high-value items like phones, perhaps, but not much else.

James Pikul, lead author on the paper and an assistant professor at Penn Engineering, told Dezeen that sheets of several metres squared will be possible in the future, but it "will take us some time to develop the technology to get there".

He also said the material had additional attractive qualities for designers.

"It is beautiful," said Pikul. "In addition to being strong and light, it reflects pure colours because it contains elements that are the size of light, and therefore interact directly with light."

Porous nature could be utilised by architects

The material's porous nature is also a feature that could be harnessed by designers and architects, as they could fill the empty space with other substances.

"I imagine having a material like steel that is porous could open new possibilities for architecture in the ability for fluids to flow through it," continued Pikul. "Wind can flow through it instead of around it. Rainwater can run through it as well." 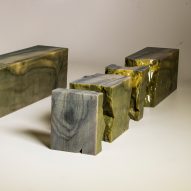 "Additionally, there could be materials that are impregnated into the pores so that it adds some additional functionality, like a thermal response, or some aesthetic value, such as paint that is part of the material so it doesn't disappear when scratched."

Engineered materials are the subject of intense study, as researchers work to make metals stronger by introducing changes on the nanoscale.

The wonder material graphene has become increasingly common since engineers succeeded in producing it, popping up in products ranging from concrete to wheelchairs to hair dye.

Photography is by University of Pennsylvania.