Construction has begun on Alárò City, which is being masterplanned by Skidmore, Owings & Merrill, as an extension to Lagos in southwest Nigeria.

Designed by Skidmore, Owings & Merrill (SOM) for the Lagos State Government and city builder Rendeavour, Alárò City will be in the Lekki Free Zone to the west of the city. It is designed to boost foreign investment and create "tens of thousands of jobs".

Over 2,000 hectares, the city will will combine a mix of industrial and commercial facilities positioned in line with the "growth path" of Lagos, one of Africa's fastest-growing cities.

The south of Alárò City will be dedicated to industrial, warehouse and logistics facilities, intended to encourage innovation.

Meanwhile, the north side of the masterplan will host offices, homes, schools, hotels, healthcare and entertainment facilities, which are orientated towards Lekki Lagoon.

All the facilities will all be positioned around approximately 150 hectares of parks and green space, which is divided into six "greenways".

These greenways will sit approximately 800 metres apart, ensuring that residents and workers will never be more than a five-minute walk from open space. 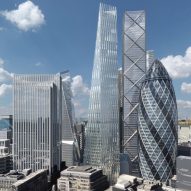 Each area in the Alárò City will be connected by a main boulevard, alongside a network of shaded, pedestrian-friendly streets and urban plazas.

Central to the masterplan is a 14 hectare park that will be used to host community events.

"We are delighted to be bringing our successful inclusive city model to Nigeria and Lagos State, the heart of the country’s vibrant economy," added Stephen Jennings, founder of Rendeavour.

"Our partnership with Lagos State will ensure that Alárò City is an economically sustainable city open to all Nigerians."

The expected date of completion is undisclosed, but SOM said that a number of multi-national companies are already building facilities on site.

Founded in 1936, SOM is an international architecture and design practice with projects completed in over 50 countries.

Alárò City follows the studio's recent reveal of a 56-storey London skyscraper with public viewing galleries, and its conversion of a century-old Chicago firehouse into Optimo hat factory.