An exhibition at Stockholm Design Week, called A Second Ago, sees 12 students examine some the most pressing issues of our time through made objects.

The students from Gothenburg University's Academy of Design and Crafts have explored issues ranging from body dysmorphia to the anthropocene.

They are presenting the results in Greenhouse, the student section of the Stockholm Furniture Fair.

The exhibition includes two tables, three lights and a mirror. There are also three sets of vessels, one of which is stacked into a plinth, a pair of chairs with curved seats, a "map" and an interactive doodling book that relies on the user drawing shadows for the given illustrations.

Each object was created as a response to the global or personal issue that the particular student felt was the most urgent and deserving of our attention.

"Some people have looked into human behaviour, others looked at problems in everyday life like body shaming," explained Hanna Crondahl, whose work was included in the exhibition.

The piece references the solar system "of a fictive future" and expresses the fact that "nothing can be captured for eternity, and the world we are familiar with today will not exist forever".

Students from various courses at the academy submitted their projects and 12 complementary pieces were chosen to exhibit. They were free to interpret the words closely, or to use the overall theme as a jumping off point.

"Some people interpreted the brief openly, looking at space for example, and how our conception of space can change with light, but also referring to the wider world," explained Crondahl.

Milena Faé produced vessels made from sugar that dissolve into water when no longer needed. Faé wanted to invert the fact that objects normally have a longer life span as waste than in their original function, to question how we should view objects in the future.

Another student to produce a set of vessels was Danielle Hélène Goulé, whose ceramic pieces are piled one on top of the other into a totem that displays a single oyster shell.

The work is an homage to the achievements of early women who played an important part in advancing civilisation by producing vessels to transport food and water.

Sofie Wallenius's mirror is partly concealed by a solid form to allow the viewer to control how much of themselves they can see reflected. The project aims to fight back against the image of an unattainably perfect body, and encourage the viewer to accept their own body.

The students make each element of their work themselves in the university workshops, using soldering irons, pottery wheels, woodworking tools and a variety of processes.

"We build everything ourselves. When you study design it's important to know what goes into actually making something," explained Crondahl.

The pair of wooden chairs made by Johanna Denecke use highly curved seats that appear to be shrinking away from their frames to reflect on the awkward phase between childhood and becoming an adult when the body often grows out of proportion.

Anna Junebro's lamp hangs on a bright red curved metal stand, whilst Sanna Schilling's wooden table has an undulating top to suggest that the people sitting around it are always changing and in turn change the table itself.

Sylvía Lind Jóhannesdóttir's lamp is made from corroded metals and copper wires, whilst Nathalie Dackelid used wood and stoneware – perhaps the only materials left in a dystopian future – to create tables.

Eve Liisa Kubinyi's "map" of the ground we walk on encourages us to open our eyes to the street under our feet, as discarded objects, textures of the materials under foot and patches of nature can tell us something about our behaviour and the society we live in.

Together they invite the viewer to explore the distance between materials when seen out of the context of time and scale. Gilmour hopes to spark a debate about humans' short-sighted tendencies that have pushed the world towards the anthropocene era.

"It's a light and furniture fair but it's also nice to see that the craft can also be visible. They fit together well and each project highlights each other. Not everybody is just making a metal chair, there's a range of techniques and styles that work together here," said Crondahl.

The only student to use digital processes was Yi-Hwa Chen, who produced an interactive booklet that invites the viewer to draw and re-draw the shadow on a set of minimalist illustrations of objects and architectural scenes as the light source changes.

Chen points out that our appreciation of shadows has been lost over time. They were previously a useful indication of the time, but became redundant when replaced by watches and then electronic devices.

The exhibition is on show at Greenhouse during Stockholm Furniture Fair, which is open until 9 February. 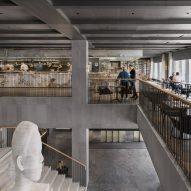