Deltour, who previously collaborated with the Swedish furniture brand on a range of accessories, designed the Rope Rug as a contemporary take on traditional carpet crafts, combining familiar weaving methods with unexpected materials.

Called Rope Rug, the design is produced in India, where craftspeople weave together three different sizes of rope using a braiding technique. The durable design is fixed with a subtle vertical thread and is available in four colourways.

"This project started years ago when we asked Pauline to design a spectacular craft rug for us," explained Hem CEO Petrus Palmer during a Stockholm Design Week launch event.

"We have ended up with a rug that we had to manufacture from scratch, meaning that we have produced the cotton and we have used a special dyeing technique that is specifically designed to make sure that the colour stays," he told journalists. "We have dyed our own cotton and made our own rope – we are rope producers now!"

Deltour began the design process by visiting suppliers in Paris, where she gathered as many different types of rope as possible. 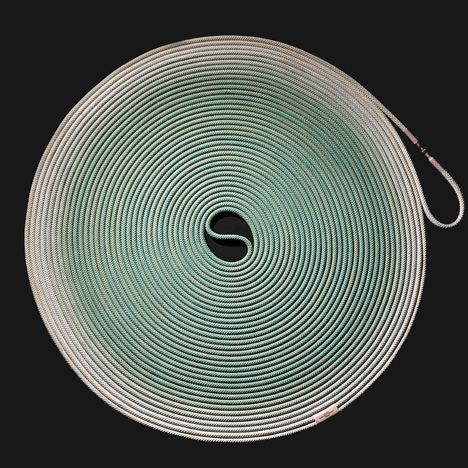 "We bought laces, ribbons and ropes and we tried to experiment as much as possible," remembered Deltour.

"We spent a month and a half experimenting with different types of weaving and patterns – we even dyed the ropes ourselves."

"We decided on the pattern you see here now, but we continued to experiment with different colours and thicknesses of rope," she continued.

"The resulting design looks very different close up compared to how it looks from a distance; from far away it's very smooth but, the closer you get, the more appealing and curious it becomes."

Available in three sizes, including a runner, the rugs feature individually dyed ropes that are designed to be colour-fast to make cleaning simple. The colourways are called Terracotta, Seaweed, Salt & Pepper and Night Blue.

Hem is presenting Rope Rug at its Stockholm showroom throughout Stockholm Design Week, which runs from 4 to 10 February.

Last month the Swedish brand also announced the opening of its first permanent US showroom. Located in Los Angeles, the store features a courtyard decorated with colourful graphics that resemble confetti.