American studio David Baker Architects has completed a housing block in San Francisco that comprises a pair of buildings covered in contrasting white cement and black tiles, and micro apartments inside.

Of the 69 total units in the complex, 35 are studios that encompass 325 square feet (30 square metres) to make the most of the available space. The remaining apartments contain one or two bedrooms, ranging from 485 to 743 to square feet (45 to 69 square metres).

Interior finishes include wooden floors, white walls and monochrome kitchen cabinetry. All of the micro units were sold before the project's completion in 2016, with one going for $550,000 (£427,432).

Roughly rectangular in plan, the six-storey complex is composed of two, connected volumes that look like different buildings from the street. One is clad in white cement plaster, while the other is wrapped in black low-fire tiles. Both have aluminium shading devices that are positioned to minimise solar heat gain during warm months. 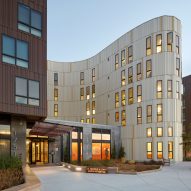 The complex features a courtyard with a variety of plantings, concrete benches and perforated screens made of weathering steel. A metal bridge cuts across the outdoor space, spanning a bioswale that helps manage stormwater by removing debris and pollution.

The ground level, devoted to retail space, contains an artisanal doughnut shop and a Japanese restaurant – both visible behind glazed walls. The apartments are on the upper storeys and are accessed by internal stairwells.

Amenities include a residents' lounge and a rooftop deck with extensive views. The building has no car parking but offers a plentiful amount of secure space for bikes.

While not readily apparent, the housing block technically shares a property with a new recreation centre for the Boys and Girls Club, a nonprofit organisation. The 43,000-square-foot (3,995-square-metre) building was created by local firm TEF Design.

David Baker's 388 Fulton complex is located near a lively dining corridor in the Californian city and the Beaux Arts-style City Hall building. The Hayes Valley district has been drastically transformed since an elevated freeway cutting through the area was razed in the 1990s.

Across the street is Richardson Apartments, a housing complex that the architect designed for homeless people. Completed in 2011, the five-storey building has a slightly concave facade, which contrasts with the outward-pushing appearance of its new neighbour.

"The positive and negative forms of the two buildings, creating complementary curves, make a frame for the City Hall dome two blocks away," the team said.

Formed in 1982, David Baker Architects has an extensive portfolio of residential projects in the Bay Area and beyond. Recent projects include an apartment building for low-income seniors in Bayview-Hunters Point. 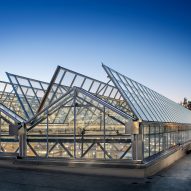