People are revealing the buildings they secretly like using the hashtag #architecturalguiltypleasures in response to a tweet by critic and broadcaster Tom Dyckhoff, who asked: "Do you have an architectural 'guilty pleasure'?"

Dyckhoff said his own architectural pleasure is the Former Swiss Bank on St James Street in London, which was designed by Rodney Gordon.

Do you have an architectural “guilty pleasure”? This is mine. One of the first buildings I “noticed” as a kid, on a trip to London. LOVE that brown glass *SO 1970s*. Former Swiss Bank, St James Street, by Rodney Gordon, of Tricorn fame. pic.twitter.com/ZsQ31EjmTb

Well-known structures including the Millennium Dome (now the O2) in London, La Defense in Paris, the Walt Disney concert hall in Los Angeles, Trump Tower in New York and the Petronas towers, have been revealed as buildings people secretly enjoy.

RIBA Journal editor Hugh Pearman's pick was the TP Bennett-designed Southwark Towers high-rise, which was demolished to make way for the development of The Shard.

Anderson's pick was the Carbuncle Cup 2017 winner Nova Victoria, which he said always makes him smile, while Hatherley revealed that he enjoyed the "Fritz Lang meets Poundbury world of 'Super' Hans Kollhoff". 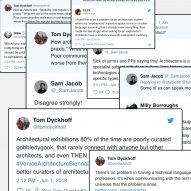 While many people shared their enjoyment of well-known buildings, Richardson picked an obscure fully glazed office near London's Euston station.

Former RIBA president Ruth Reed asked if she should be guilty about liking the Petronas Towers in Kuala Lumpur, which was designed by César Pelli. It was the tallest building in the world when it completed in 1998.

Although many architects profess to favour a minimal aesthetic, the majority of guilty pleasures were more extravagant. This suggests that a lot of critics and architects enjoy the glazed and colourful architecture of the 1980 and 1990s, even if they would normally keep this secret.

The top image is by Zakgollop, licensed under the Creative Commons Attribution 2.0 Generic license.