Named Geometry of Light, the installation was intended to animate and highlight the iconic design of the building, completed by Van der Rohe in 1929.

"Geometry of Light is an immersive intervention at the Barcelona Pavilion envisioned as a contemporary lens for this important masterpiece," explained Chicago-based Luftwerk.

"It highlights and expands upon the architectural and material features of the structure."

Considered a seminal work of the modern movement, the Barcelona Pavilion is famed for its minimal floor plan that is based on a formulaic grid system.

It has exotic marble walls and floors that extend out from its interior to form a continuous space, blurring the boundary with the outside. 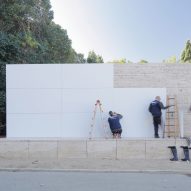 The Geometry of Light installation was developed as an extension of this grid-like structure, to enhance the illusion of its physical boundaries.

"The projected grid of light animates the floor that extends beyond the steel-framed glass walls, accentuating the flowing space that permeates through the interior and exterior," added Luftwerk.

The projections were choreographed to change, scanning different parts of the pavilion in time to an ethereal soundtrack by sound designer Oriol Tarragó.

As well as tracing its internal walls, they extended out into the two adjoining water basins, and across Georg Kolbe's iconic Alba sculpture. 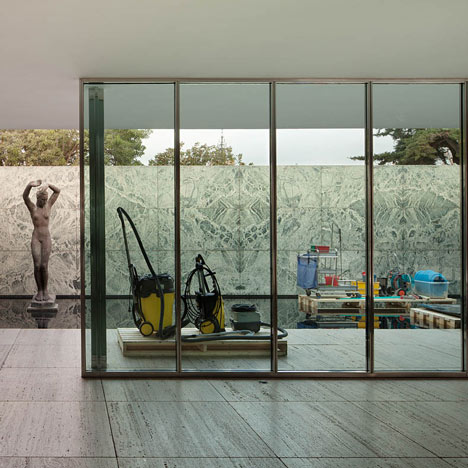 Following its debut in Barcelona, Geometry of Light will be installed at Mies van der Rohe's one-room Farnsworth House retreat near Chicago as part of the third Chicago Architecture Biennial.

Geometry of Light is not the first installation to alter the appearance of the Barcelona Pavilion. In 2017, architects Anna and Eugeni Bach made it more minimal than ever by covering all of its walls with white panels.

In 2009, Chinese artist Ai Weiwei filled the pools with coffee and milk, before Spanish architect Andrés Jaque filled it with junk from the basement in 2013.

Photography is by Kate Joyce