The Institute for Advanced Architecture of Catalonia and not-for-profit organisation Bauhaus Earth inserted a series of cross-laminated timber elements into Ludwig Mies van der Rohe's iconic Barcelona Pavilion to promote the use of wood in construction.

The Institute for Advanced Architecture of Catalonia (IAAC) and Bauhaus Earth also created an elevated lookout, walls, steps and a stage for events over the pavilion's pond, offering new ways of experiencing the famous architectural site.

Open from the 1 to the 9 October 2o22, Mass is More marked the launch of the Mass Madera Network, a group established through grant funding from Built by Nature to encourage the use of mass timber in Spain.

"If the 19th century was the century of steel and the 20th century the century of concrete, the 21st century will be the century of wood, not only because of its constructive qualities but because it is the only material with potentially positive externalities," said IAAC and Bauhaus Earth.

"This installation demonstrates the structural capabilities of this new materiality."

Reinterpreting the Barcelona Pavilion's luxurious palette of onyx, marble, steel and glass, a variety of wooden finishes were used, including a panel inside that was digitally milled to create a 3D topography on its surface.

Information tags on both the original and new materials detailed and compared their carbon footprints, and were accompanied by an interactive digital application created by visualisation company Bestiario.

Mass is More also featured a video installation by filmmaker Jaume Cebolla, as well as physical models exploring the process of manufacturing CLT from the forest to the city and the environmental impacts of different materials. 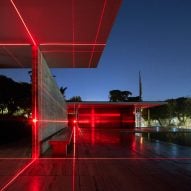 "The comparative analysis comprises the embodied carbon emissions in every element, as well as the energy utilised, kilometres travelled and steps taken during the different processes of extraction, manufacturing transport and assembly," said the design team.

"[This] creates a dialogue between the most advanced materials of the 20th century and the 21st century," it continued.

The CLT used for Mass is More was financed and produced by the Galician company Xilonor, which is part of the wood-manufacturing group FINSA.

A previous project by staff and students at the IAAC include the Solar Greenhouse, which also addressed ecological issues in design by creating a prototype space for energy generation and "zero kilometre" food production.

The photography is by Adrià Goula.