Amsterdam-based Studio Drift "de-produced" a bicycle and a pencil into the chunks of the materials used to make them for an exhibit at the inaugural Frieze Art Fair in Los Angeles.

The studio deconstructed the manmade items to highlight the amount of natural resources and effort involved in the extraction, labour and manufacturing of their production – a matter Studio Drift believes is typically taken for granted.

"Confronting the viewer on a very elementary level with the objects that surround them, this new work inspires fresh contemplation of the raw materials at our daily disposal," said the studio. "We make clear how much of the matter within these objects is extracted from the earth."

Called Materialism, the project was initiated by Studio Drift last year and shown during its first major retrospective at the Stedelijk Museum in Amsterdam, as seen in these images.

Pace Gallery chose an edited selection to exhibit during the inaugural Frieze Art Fair Los Angeles, which took place from 15 to 17 February 2019, marking Materialism's US debut.

The objects on show at Frieze included a bicycle presented as chunks of rubber, polyurethane, steel, aluminium and lacquer paint, among many others. A pencil was displayed as a simple trio of wood, graphite and paint, while other products include an LED light, electrical cable and a Light Bulb.

The wider series, meanwhile, includes a Volkswagen Beetle car broken down into over 20 different blocks.

For each of the objects, the simple volumes are either stacked or arranged side by side to form a display far removed from the recognisable form. Studio Drift likens the compositions to the work of celebrated abstract artists.

"We essentially create uniqueness, unity, and 'de-abstraction' in the form of simple geometric blocks," said the studio. "These blocks of varied, pure colour make visual rhymes with the earliest works of abstract art such as the paintings of Kazimir Malevich, Hilma af Klint, and Piet Mondrian."

Studio Drift found the disassembly process surprising, and that the amounts of materials used for some objects was particularly "startling". Among the standouts was the quantity of plastic and copper used for just a metre of electrical cable.

"This leads us to imagine how many hundreds of metres of cable can be found in our very studio, in our home city of Amsterdam, in the world," the studio said. "The billions of kilos of copper and plastic, if represented by Materialism, would make blocks that would soar upwards past the clouds."

Studio Drift was founded by Lonneke Gordijn and Ralph Naut in Amsterdam in 2007, after the duo graduated from Design Academy Eindhoven.

Since then, they have produced projects that explore relationships between nature, technology and man. In a 2018 interview with Dezeen, the duo said their the aim is to inspire "a positive version of the future". 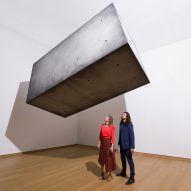 The studio hopes that Materialism will spark conversation and change around the impact that products and material goods have on the environment.

"If humankind could somehow perceive this connection to materials, to our collective consumption and the earth it impoverishes, it would be a leap in our social evolution, in building an awareness that we must somehow become better stewards of our future," Studio Drift said.

Photography is by Ronald Smits, unless stated otherwise.