Worrell Yeung designed the renovation for a 3,200-square-foot (297-square-metre) apartment inside the Clocktower Building.

Built as a factory in 1914, the 16-storey building was converted into 124 residential units in 1998. The apartment renovated Worrell Yeung, called Four Corners, is located on the 14th floor.

To update the interiors, the team painted the walls, concrete ceilings and a single column all white. These provide a backdrop to new finishes that include three varieties of marble – used for vanities, countertops and built-in furniture – a speckled grey terrazzo, and a pair of volumes clad in white oak.

"The concrete ceiling and structure of the historical warehouse are exposed and expressed throughout to highlight the rawness and texture of the building, juxtaposed against warmer materials, and the pure minimal lines of the new elements," said Worrell Yeung in a project description.

Photographs of the apartment, taken before it was furnished, highlight the contrast between the building's industrial structure and the minimal treatment brought on by the renovation. 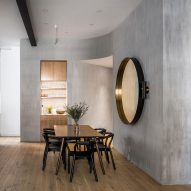 The residence featured an open-plan layout due to the arrangement of the factory. Its elevated position offers unique views of the city – including the Brooklyn, Manhattan and Williamsburg bridges, the Financial District, and the Midtown Skyline.

In order to provide divisions between different areas, while also leaving vistas open through the large windows open, Worrell Yeung inserted two oak-clad volumes into the centre of the space.

These contain a bar area and bookshelves, as well as services like the elevator core, emergency stairwell and laundry room.

"The design of this loft was inspired by the unique panoramic views of Manhattan and Brooklyn," said the studio, which is based in Chinatown.

"Two distinct volumes become the visual and organisational hub of the loft, allowing each space along the perimeter to take advantage of the expansive four exposures of the New York City skyline beyond."

Another volume clad in black wooden planks is located at the entrance. Inside, it contains a powder room, coat storage and an angular marble bench for residents to put on their shoes.

Access to the home's main social space is provided from here. The architects told Dezeen they prioritised the size of this area over the three bedrooms to offer plenty of space for entertaining guests.

Two of the bedrooms face north, overlooking Brooklyn, Queens, and Manhattan, while the third smaller bedroom faces east, away from the city. The architects saved the best view, however, for the library, which occupies the southern side of the apartment.

Worrell Yeung, which was established in 2014, has also refurbished an apartment in a former Second Empire-style building in Manhattan. Other projects by the studio include a barn in Upstate New York that doubles as an exterior living room. 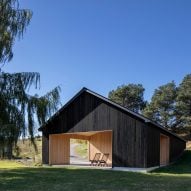