Citroën has revealed its vision for the future of mobility in cities, the Ami One Concept electric vehicle, designed to be an alternative to both shared bikes and cars.

The ultra-compact vehicle only has a top speed of 28 miles per hour, which means in many countries, it can be operated even by people without a driver's licence for cars.

The unusual specs make the Ami One concept an alternative to hiring an electric bike or scooter to get around a city on a rainy day, or using public transport. For lack of established naming tradition, Citroën is calling it an "urban mobility object".

Citroën believes that based on current legislation, European customers could drive the Ami One Concept on average from the age of 16, with or without a licence.

The French automaker designed the zero-emissions vehicle primarily to be available on-demand through an app for trips ranging from five minutes to five hours. It would have a range of 65 miles and can be charged either at public charging stations or at home.

While the car is only a concept, it is an advanced one, with a prototype said to be available for test drive at the upcoming Geneva Motor Show from 7-17 March. Citroën intends to rent out the vehicle through the existing car, bike and scooter sharing Free2Move carshare app.

The company described the vehicle as a "disruptive" object, and adapted a classic French rallying cry to form the project's new hashtag #LibertyElectriCityMobility.

"Since 1919, Citroën's history has always reflected its times with non-conformist and revolutionary vehicles that have become icons in the hearts of motorists," said the company.

"At the 2019 Geneva Motor Show, the brand is reinventing itself and unveiling its uninhibited take on an urban mobility object. As the 2CV made freedom of movement broadly accessible, Ami One Concept frees up urban mobility for everyone with its unique and popular character advocating a new experience."

The Ami One Concept has a distinctive exterior that Citroën described as looking "as if sculpted from a solid block" and exuding "robustness" — a quality that drivers of the 1.5-metre-high, 2.5-metre-long vehicle might understandably appreciate while sharing the road with conventional cars.

There is a folding roof so drivers can ride open-top if they wish.

Another feature of the orange-and-grey exterior is the lighting, arranged into thin, floating, horizontal "Vs" on both the front and the rear. Citroën drew on its earlier CXperience concept car for this element of the design, which it is developing into a brand signature. 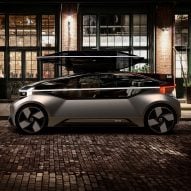 The handles are blue rubber straps, with the driver's side door swinging open on a rear hinge for better cabin access.

The deep blue colour takes over more in the interior, which features openwork seatbacks with a cube pattern woven using a caning technique developed by Studio Plott. The same pattern recurs on the grey floor mats.

The seats are arranged asymmetrically, with the passenger seat fixed into position at the back of the cabin and the driver's seat able to slide forward on rails.

The interface relies on the driver's smartphone, which the car would be booked on through an app and unlocked with. Once inside the cabin, the driver docks the phone into a wireless induction charging station, and the screen is projected onto a panel in the driver's field of vision, enabling them to view navigation and driving instruments.

The driver can use two buttons on the steering wheel as well as voice commands to control the app.

With its modest size and horsepower, the Ami One is world's away from most concept vehicles showcased at the annual Geneva Motor Show. Designs unveiled at the show in recent years have included Airbus' flying car, Renault's autonomous Ez-Go and Aston Martin's cashmere and silk Lagonda Vision.