Swedish car manufacturer Volvo has unveiled an all-electric, self-driving vehicle that can double up as a mobile office, bedroom or living room.

The car brand revealed its 360c concept vehicle, which is designed to reimagine the balance between life and work, on 5 September.

The concept car allows passengers to make use of  "unproductive" or "boring" time lost commuting, by squeezing in some extra minutes of shut-eye, catching up on work, or meeting up with friends and family while in transit.

Without an engine or steering wheel, due to level five autonomy that means that it requires zero driver input, the vehicle is left with the maximum amount of interior space.

Taking advantage of its driverless capabilities, the sleek, modular interior can be configured in four different ways to cater to the passengers' varying needs while travelling.

Several spacious seats and a table allow the cabin to become a mobile office, a living room or an entertainment space, while a fold away bed can convert the car into a comfortable sleeping environment.

A large, curb-facing door welcomes users into the vehicle, where large expanses of glass in place of windows act as interactive screens.

There is also included storage space for luggage, clothes, food and bedding.

"The 360c explores what becomes possible when we remove the human driver, using new freedoms in design and recapturing time – it's a glimpse at how autonomous drive technology will change the world as we know it," said Mårten Levenstam at Volvo.

"The possibilities are mind-boggling."

The Swedish vehicle manufacturer believes that its 360c has the potential to replace short-haul air, bus and train travel – offering more comfort, convenience and privacy than these existing types of transport. 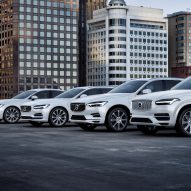 It likens the self-driving vehicle to a first-class private cabin that can offer travel from door to door, ridding of the inconvenience of airport security, queuing, and noisy, cramped airliners.

Having to co-exist with ordinary vehicles and pedestrians, the 360c features an LED communication band wrapped around its exterior body, which paired with audio signals, enables it to communicate with other human drivers and passers-by about its movements.

As well as having both safety and environmental benefits – such as less pollution and less congestion – the automaker also believes that the concept would allow for more residential freedom, alleviating pressure on real estate pricing and offering more affordable home ownership.

While Volvo hopes that the 360c will soon become a reality, it sees the concept as more of a conversation starter than one that can lead wider developments as autonomous technologies continue to advance.

It believes that fully autonomous vehicles have the ability to change the structure of our society in more ways than one, changing how people travel, how cities are designed and how we use infrastructure.

"We are just one of many stakeholders, so we expect and invite a broad discussion as society learns how to make the most of this revolutionary technology," said Levenstam.

This is not the Swedish carmaker's first steps into more eco-friendly and efficient automotive design. Back in July 2017 the firm was the first of the major car companies to make a pledge to release only electric and hybrid vehicles from 2019 onwards.