Marina Abramović: The Life was a series of performances that took place at the gallery over five days.

Visitors were asked to surrender all their belongings before donning a headset and entering an enclosed gallery space with a roped, five-metre circle, in which the Serbian artist was rendered as a 3D mobile simulation of herself.

Made in collaboration with production studio Tin Drum, the Marina Abramović: The Life performance uses a combination of virtual and augmented reality called mixed reality.

Viewers are able to see a virtual image within a physical space, without the need for an intermediary screen, such as a mobile device.

"While virtual reality closes you off from the world, mixed reality is literally blending it in with the real world," Todd Eckert, director of The Life and founder of Tin Drum, told Dezeen.

This enabled visitors to see Abramović as if she were actually in the room. "Marina is performing in the same orientation for everybody in the same way. If you are seeing her from the front, someone else is seeing it from the back," said Eckert.

Lasting 19 minutes, the performance is the first time mixed reality has been used in an art piece, according to the Serpentine Gallery.

A wearable spatial computing device called a Magic Leap One is worn by visitors, which stores the digital recording of Abramović.

The device is calibrated upon entering the room using a QR code-like wall of dots – a process which positions the artist in a precise location within the roped circle.

"The calibration gives you a specific representation of the content in space so it tells your device where to put Marina," continued Eckert.

The 19 minute clip features the artist walking around the room and slowly disintegrating into blue dots, before reassembling in the space.

It was made using an "extensive volumetric capture process" of 36 cameras that filmed Abramović from different angles. This information was used to build a 3D moving composite of the artist.

"The recording of Marina is called volumetric capture. It isn't a flat image or a 3D film – which is stereoscopic where you have something closer to you and something further away – but a fully 3D photograph," explained Eckert. 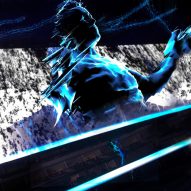 Whilst the installation was on show at London's Serpentine Gallery for a week, it can be replicated elsewhere using the captured visualisation of the artist.

"The fact that the project can be repeated anywhere in the world while I am not there is mind-blowing," said Abramović.

"I can be present in any spot on the planet. I hope that many other artists will follow me and continue to pioneer Mixed Reality as an art form," she explained.

An increasing number of artists are using augmented reality, including U2's creative director Willie Williams who created a giant avatar version of Bono for the band's latest tour.

Marina Abramović: The Life took place at the Serpentine Gallery in London between 19 and 24 February 2019.