The former Central Saint Martins student takes post-consumer denim offcuts from the production waste of fashion industries and from households to create the new material.

She layers the textile offcuts on top of each other and bonds it together using resin, before carving it into different elementary shapes and assembling them in playful ways to make furniture pieces.

This process makes each design unique; varied in size, shade, colour and texture by the non-standardised nature of the process and the waste materials used.

Lightweight yet durable, the denim material allows for diverse application in furniture, wall panelling or on interior surfaces.

According to the Berlin-based designer, Bahia Denim is characterised by its visual resemblance to marble, which is why it is named after the Brazilian blue marble Azul Bahia.

The project was born when Rowley started experimenting with different ways of reworking household waste, beginning with more commonplace remnants such as glass, styrofoam, textiles and plastics.

When she decided to move on to denim textiles, she researched the construction of sedimentary rocks, which are formed from the broken remains of other rocks that become fused together.

She attempted to replicate this additive nature by building up layers of denim waste, using different shades and sizes of the material to develop varied and vibrant patterns. 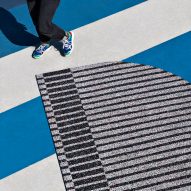 "By applying a set of industrial and craft processes to these waste materials, I was able to experiment until the materials took on completely new aesthetics and were almost simulating natural materials such as stone or wood," Rowley told Dezeen.

"The idea of starting with something very worthless and making it into something aesthetic has always been appealing to me," she continued.

"I wanted to prove that it is not necessarily the material source which decides on the value associated with materials but more so how we work with materials themselves and the processes we apply to them."

Rowley initially developed the Bahia Denim as slabs of material before moving onto the creation of furniture and products.

"Once it is made into a material it can be processed in a similar way as wood is," she explained. "For the rounded shapes that were made for the Bahia Denim Slate tables, the material was formed over a mould and could then take on a three-dimensional shape."

Rowley is just one of many designers focusing their efforts on using recycled materials in their work. Dutch startup Plasticiet used recycled plastic to create materials with a similar appearance to manmade stone composites like terrazzo, while Simone Post designed a series of graphic rugs from old trainers for sportswear giant Adidas.