Dutch designer Simone Post has created a series of graphic rugs from old trainers – one of the hardest fashion products to recycle – for sportswear giant Adidas.

Post was invited to create the Stripped Back Stripes rugs for the new Adidas store in Paris after the sportswear company saw some of her previous work with recycled textiles.

Instead of working directly with offcuts from the manufacturing process, as she has done with previous collaborations, Post chose to focus on finding a way to re-use old sports shoes.

"What is very interesting about working with shoes is that it became a much bigger market recently," Post told Dezeen. "Sport shoes are not only for sports, but people just wear them all the time. Almost everybody owns a pair."

She discovered that trainers were among the hardest products to recycle because they are made from so many different components, often involving multiple types of hard and soft plastic, metals and textiles held together with very strong glue.

"It is a very hard material to work with, because it is impossible to separate the one from the other," said Post. "So we collaborated with I:CO, a German company who specialise in recycling shoes."

"They first shred the entire shoe, and after the shredding process they start to divide the material into different qualities," she explained.

"So you get a dust fraction with a lot of textile waste and also one with harder plastics and one with softer plastics. With those granules we could make the rug."

Post is known for using graphic patterns and shapes and bold colours, but settled on a limited palette for the Stripped Down Stripes mats – a decision partly driven by the limitations of the recycling process.

Initial samples of the recycled particle materials generated by shredding the shoes were a uniform grey colour, which she described as "sad".

Eventually, Post discovered that it was possible to create different colours by combining the recycled shoe granules in different ways.

From a distance, the two shades used for the rugs look like a lighter and darker grey, but up close it becomes clear that each shade contains multi-coloured granules.

For Post, the final effect offers a more interesting quality than if the same product was produced using virgin plastic to achieve a true black-and-white contrast. 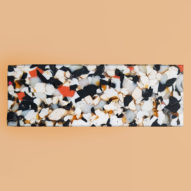 "Of course this would also be very graphic," she said. "But it would lack the deepness and tactility that it has now created by the colour melanges in the granules."

"The varied colour melanges in the granules give the product a very tactile feeling – a feeling that adds a lot of value to the store interior and also is very good for the acoustics in a place," she added.

Post now hopes to develop the material further and create entire floors from it, describing the potential effect as a "modern type of terrazzo", and is also interested in finding a way to make new shoes from the recycled material.

"It is not understandable if you do not think about it as a designer," said Post. "There is already so much material out there that does not have a purpose, but is just leftover."

"If I look at these materials I don't see waste, instead I only see new possibilities of what we could make," she added.

"There is so much potential in 'waste' materials, so why not give them a second life, instead of using new resources? It is an extra challenge but it gives me much more satisfaction to use discarded material."

Post focused on material research during her studies at Design Academy Eindhoven, and was part of a group of graduates that chose to exhibit only material experiments during Dutch Design Week in 2016. After graduating in 2015, she is now based in Rotterdam.

She is just one of a growing number of designers who are focusing on using recycled materials. In The Netherlands, studios like Plasticiet are developing new surface materials made from recycled plastic for use in interior and product design.