A wintery beach in Canada provides the setting for colourful installations based on the concept of migration, both human and natural, for Toronto's annual Winter Stations programme.

In its fifth year, Winter Stations is an annual initiative to draw Torontonians out of their homes despite the cold weather and enjoy a local beach on Lake Ontario.

Set up on the beachfront along Lake Shore Boulevard East, the six temporary installations for 2019 are designed as loose interpretations of existing lifeguard stands.

The annual public art competition is organised by a trio of local studios – RAW Design, Ferris + Associates, and Curio – and a jury nominates designs created around a specific theme.

This year's subject is migration, and four pavilion designs that use this as a starting point were chosen to be constructed. Two other temporary structures on the beach were made by students from Canadian universities Sheridan College and Humber College.

"Designers were asked to explore all facets of migration, including the complex social issues that surround humanity's shaping of our global society, the flight of animals and the exchange of ideas," said a statement.

In the middle of the strip of beach is a colourful production called Cavalcade by local designers John Nguyen, Victor Perez-Amado, Anton Skorishchenko, Abubaker Bajaman and Stephen Seunwon Baik.

The design is based on life-sized cutouts of adults and children in different colours, arranged organically on the beachfront like a group. The project reflects a procession of people: the definition of a cavalcade.

"Cavalcade is an installation that reflects the collective spirit of human movement and the transversal," said the designers. "Not just in the contemporary political sense of global migration, but in the consensus that the human quest for a better life is one that is timeless and universal."

At the middle of the grouping is a mirror, allowing visitors to integrate themselves into the installation. "The spectator is placed in the midst of this movement as their reflection off a mirror at the centre of the installation reaffirms this collective connection," the team said.

Another installation, Above the Wall by Joshua Carel and Adelle York of Boston, brings political commentary into its migration-themed design.

The structure resembles a border wall, clad in corrugated metal, with a stairwell that climbs up over to the opposite side. 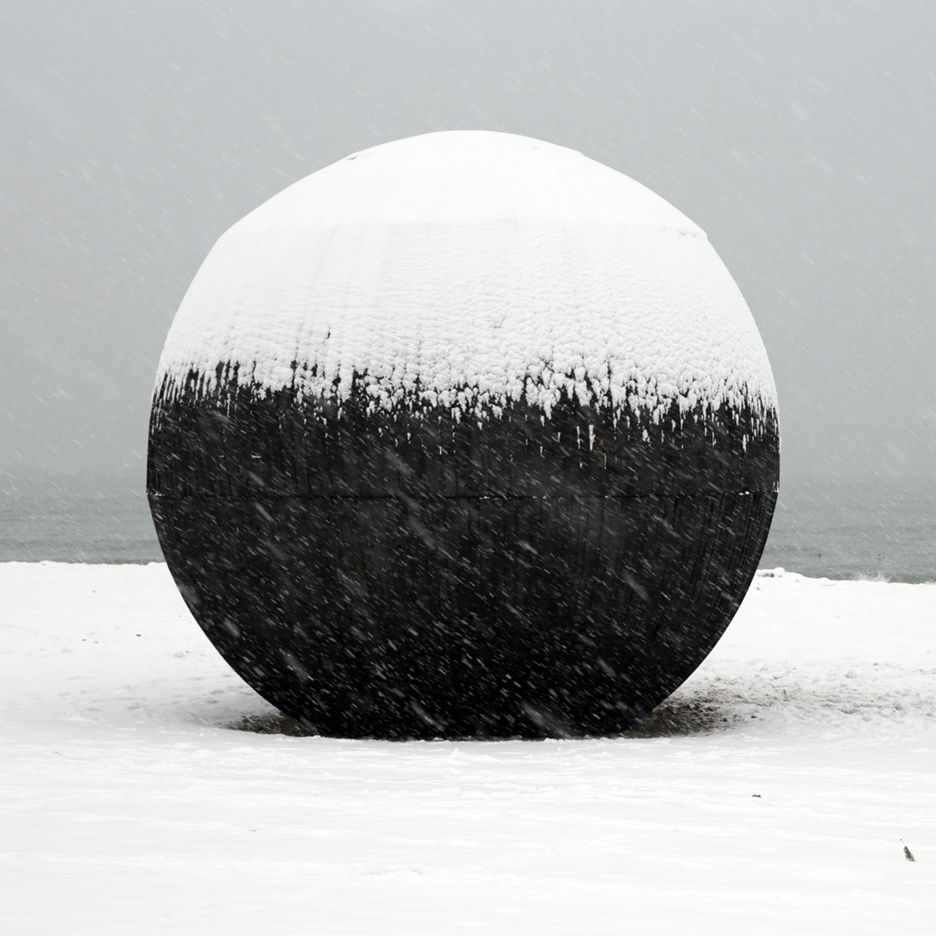 "In the current global political climate, the idea of a wall as a literal physical boundary between countries is reemerging as a nationalist tool to prevent migration," said York and Carel.

A third Winter Station design is Mind Station by Tomasz Piotrowski and Lukasz Chaberka from Warsaw. The large, cylindrical structure has a hollow core and holes on its roof. People enter inside and stand atop platforms, poking their heads out from crevices.

The fourth and final design chosen for the outdoor art competition is a butterfly-inspired pavilion, offering a different interpretation of migration with cues to nature.

Created by Luis Enrique Hernandez from Xalapa, Mexico, Forrest of Butterflies is constructed with dozens of butterfly shapes carved from wood. The abstract insect forms are painted red, orange, yellow and cream, and are stacked on top of each other to form pillars.

"The Forest of Butterflies represents the forests of Michocan, Mexico, where year-after-year the insect with the longest migration in the world is received, The Monarch Butterfly," Hernandez said.

At the far end of the beach, and closer to a local dog park, is Ground² by students at Humber College. The design encourages people to step above the sand on elevated, metallic purple platforms. The design is tied to nature, but also has a socio-political meaning.

"This dispersed plateau reflects on the near future of the world's dissolving glacial landscapes that will propel imminent environmental refugee crises," said students.

The other installation designed by students is titled Chairavan, by colleagues at Sheridan College. Mimicking the frames of the lifeguard stations, their collection of lookout platforms are painted red and built at different sizes to create a variety of vantage points.

Last year's Winter Stations included an enormous pink Pussy Hut pavilion and a white structure evocative of a nuclear cooling tower, while in 2017, a frame with upside-down Christmas trees and a gridded mirrored design were among the structures built.

In 2016, Toronto's Winter Stations featured a transparent sauna and a hallow timber sphere. The first year for the initiative was 2015, with designs incorporating a canopy of red drapes and a spiky wooden shelter.

Photography is by Khristel Stecher.