Barcelona-based designer Guillermo Santomà installed a series of sculptural and "transgressive" structures in the lavish interior of a baroque-style mansion in Madrid.

Presented at Madrid Design Festival, which took place between 1 and 28 February 2019, the temporary installation was located in the Spanish capital's Cerralbo Museum, a 19th-century mansion and former home of the 17th Marquis of Cerralbo.

Intended to establish a "peculiar relationship with the permanent collection", the installation saw Santomà install site-specific spatial interventions to correspond with areas in the mansion.

The juxtaposition between Santomà's contemporary interventions and their baroque surroundings was meant to initiate a "dialogue between the 19th and 21st centuries".

"The exhibition constitutes a daring bet on contemporary design and the interpretation of historical spaces," said the museum, adding that the installation was "a personal reading of the museum" by Santomà.

The Miami Couch, for example, was located in the museum's Chamfered Corner Room – an area originally intended for sitting and lounging.

Consisting of a chaise lounge and a circular pouffe, the work is coated in a thick purple resin that appears to have been poured over the furniture to create a puddle-like mass that connects and surrounds both objects.

Also in the exhibition was a giant metal structure with neon lights called Disco, which was situated in the mansion's ballroom. It features an angular scaffold-like framework with a cluster of geometric lighting fixtures.

A jagged, light-blue structure that functions as a working piano was also located in the ballroom. Called Piano, the installation piece is made from craft foam and embedded with speakers, a modifier and a keyboard.

It was accompanied by an angular, translucent perspex seat "dripping" in purple and white foam.

The instrument was played by two pianists at the opening of the exhibition, in keeping with the "original use of the ballroom".

Elsewhere, a ceiling fixture called Thinking Chandelier – a meandering red and green translucent tube – hung over a traditional chandelier in the building's stairwell.

A geometric red structure called Escritorio Librerí, which translates as "writing desk", was placed in the building's library. 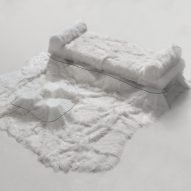 "Some pieces are integrated in a fluid and natural way in the environment, such as Miami Couch in the Chamfered Corner Room or Chandelier in the main staircase,"explained the Cerralbo Museum. "Others have, in appearance, a more transgressive presence."

Santomà explained that he felt connected to both the museum itself and its owner through the project.

"It gives me peace of mind that the museum is more baroque than I am. As if it has a familiar language, as if I have been taken into my own home," said Santomà.

"I feel conceptually part of the Marquis of Cerralbo with the idea of collecting an accumulation of things to create a space," he continued.

The Guillermo Santomà exhibition was on show between 1 and 28 February at the Cerralbo Museum in Madrid.

Santomà also exhibited his work at last year's Design Miami. His Sofa Pelo, shown by Barcelona's Side Gallery, was one of the many furry creations exhibited at the design fair.