Four designers from London's Royal College of Art have recycled the toxic red mud residue from aluminium production to make a series of terracotta-hued cups, bowls and teapots.

The project aims to find the value in "waste" by recycling the industrial by-product into a sustainable alternative to raw materials.

Guillermo Whittembury, Joris Olde-Rikkert, Kevin Rouff and Luis Paco Bockelmann – who make up Studio ThusThat – began studying the potential of secondary resources, in a bid to realign our perception of waste.

Red mud, also known as bauxite tailings, is a by-product of refining bauxite ore into alumina to make aluminium. The material mainly consists of iron oxide, which grants it a vibrant, rusty colour.

For every tonne of alumina produced, the process can leave behind as much as two tonnes of red mud, which is highly alkaline and hard to neutralise.

"Upwards of 150 million tonnes of red mud are produced every year, enough to stack in industrial barrels six times to the moon," the designers explained.

"Currently, it is left unused in giant pits around the world," they added. "While these make for beautiful satellite images, the environmental costs are a given."

The group wanted to find a better use for this toxic by-product, while also making people aware of the impact of materials that are taken for granted, like aluminium.

They chose to turn the red mud into ceramics to highlight the contrast between the two processes. While ceramic production is associated with "warmth, fragility, and finesse", the creation of aluminium is a "brute" and "gargantuan" industrial process, they explained.

"Having a cup of tea from industrial waste may seem odd to some," said Olde-Rikkert. "But we need to re-evaluate the stigma around the term 'waste'."

"We want to bring the material to your hands – to bring it from the backstage of wastelands into your living room," he added.

The designers worked closely with material scientists and ceramicists to explore the potential of the material as both a ceramic and as a geopolymer building material.

After sourcing the red mud from an alumina refinery in the South of France, the group carried out hundreds of tests to develop their own clay bodies, slips, glazes, and concretes.

They used a standardised slip-casting process to form the ceramics, which was made possible by a fine particle size.

Red mud was also used to make the glazes, which produced "surprising" results each time due to the abundance of metal oxides in its composition.

"Most surprising, perhaps, was the variety of body colour by firing temperature, ranging from a soft terracotta red, through to purple, and eventually black," said the designers.

"Our hope is to hint at the potential of secondary material use, and to surprise people with the redder and muddier brother of the shiny metal we are familiar with on our devices," they continued.

These RCA designers aren't the first to reveal the value in waste. Lithuanian designer Agne Kucerenkaite made a series of colourful ceramics from industrial metal waste in a bid to promote a more circular economy.

Kucerenkaite's project was shortlisted for last year's Dezeen Awards, which will be taking place again in 2019 with a panel of highly esteemed judges including Winy Maas, Marc Newson and Imogen Heap. 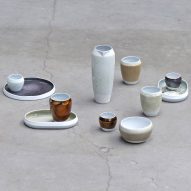