Barcelona studio TAAB6 has renovated a 1930s townhouse in the city's Horta district, Casa JJA, to create a family home that merges contemporary and traditional features.

TAAB6, which is led by architects Ivan Llach and Raquel Colacios, said the aim was to keep or recover as many as of the house's original elements as possible, then create a few additions to make the space suitable for the day-to-day life of a young family of five.

The ground floor entrance area, lined with original tiles, leads through into a large open-plan kitchen, dining and living area that was originally divided up into six individual rooms.

A sliding door opens up the space to a garden where a generous sheltered patio is covered by a bamboo pergola for outdoor dining.

By using the same concrete flooring both inside and on the patio, the space is designed to feel like one continuous room that blends indoor and outdoor spaces. 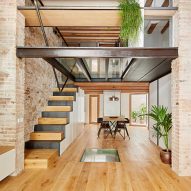 The new minimalist kitchen is plywood, with quartz countertops from British brand Silestone.

Throughout the house, white plaster walls are combined with original exposed brickwork. Some of the rooms also feature barrel-vaulted brick ceilings, which were discovered during the renovation. These are known locally as "volta catalana" meaning "Catalan arch".

On the first floor, TAAB6 has merged two rooms together to create one generous street-facing kids' bedroom at the front of the house. Meanwhile at the rear, three rooms are combined to create a larger garden-facing master bedroom with a balcony shaded by a trio of rolling wooden shutters.

Here there is also a new cube-shaped volume made from termoarcilla – a type of thermal insulating clay block typical of the area – which houses the master bedroom's en-suite bathroom.

The studio said that it wanted the house's rear elevation to be a collage of terracotta textures and colours that blend with the adjoining properties and frame the garden.

Much like TAAB6, architect Valentí Albareda kept original details in the renovation of a triplex apartment in Barcelona's Sant Antoni neighbourhood.

Throughout the early 20th century the home served as a banana warehouse, but now features contemporary furnishings set against crumbling brick walls.

Photography is by Aitor Estévez.